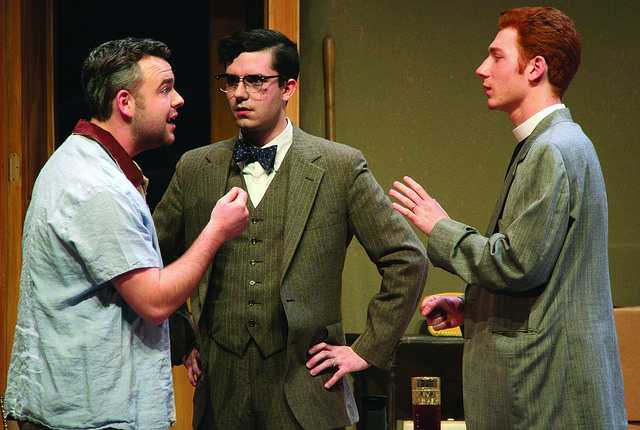 Director and Communication Arts and Theater Professor Daniel Crozier said he, along with the rest of the theater department, chose this play because this year marks Allegheny College’s Year of Voting Right and Democratic Participation.

According to Leanne Siwicki, ’15, a member of the cast, the play is inspired by Lorraine Hansberry’s “A Raisin in the Sun.”

“It’s kind of supposed to be a contemporary response to “A Raisin In the Sun” and kind of how we still can’t talk about race between 50 years so it circles around talking about race and what people are doing in a neighborhood by rezoning and tearing down buildings,” Siwcki said.

A.J. Long, ’15, a member of the cast, said the plot of the play addresses some serious issues regarding race.

“The first act is set in 1959 in Chicago where the family who lives in this house are about to move out and an African-American family is about to move in. The whole act surrounds this black family getting moved in and what the rest of the neighborhood is going to do about it,” Long said.  “Then the second act is 50 years later in 2009, so now a white family is trying to move into the house and renovate the house but a family member of the black family that once lived there is trying to preserve the house.”

Crozier said the play is pretty provocative and does not know how the Allegheny community will respond.

“We’re going to have a conversation with the audience afterwards so we’ll get a good idea [of how they will respond],” Crozier said.  “It’s a pretty interesting play.  It’s multilayered so it’s not just addressing one thing.  So I think people could take a lot of different things from this production and I hope they will.”

Crozier said it had been a really difficult, adult play to work on.

“It reflects our society in a number of ways that is hard to look at.  I think we have a hard time talking about race in America and I think the play addresses that,” Crozier said.

According to the official press release, “Clybourne Park” won the Pulitzer and Olivier awards for Best play in 2011 and a Tony in 2012.

“‘Clybourne Park’ is a universal story that isn’t about American black/white history,” playwright Bruce Norris said.  “It’s about territory and disputes over territory because of ethnicity or difference.”

The cast started rehearsing in early December, comingback early from winter break in order to rehearse.

“We came back the weekend before classes started to rehearse and we’re usually in rehearsal from 7:00 to 10:30 p.m., Sunday through Thursday pretty much since then,” Siwicki said.

Both Siwicki and Long said the hardest part of preparing the performance was learning to trust one another on stage.

“The play is a lot of conversation so it was initially hard to get off book for it because it’s a lot of back and forth so that was definitely hard and it’s also been hard to bring your lines to the table but then also to rely on everyone else to kind of keep the scene going,” Siwicki said.

Long said that the most enjoyable part of rehearsing has been to see how he embodies the role.

“When I’m on stage things that are supposed to make my character angry actually get me angry,” Long said.  “In the beginning I was just acting like I was angry but going on my blood pressure would rise and my heart would start to race and I would actually get mad.  So I think that’s been a really cool experience for me because this is the most I’ve ever been focused on my character and one with my character.”

Crozier said that the best part of working on this particular play was how every working part came together and everyone worked together to create something.

“The way the crew works with the stage managers and the way the cast works with each other, the set builders and the costume builders all kind of come together.  There’s a lot of work that goes into this and it’s really wonderful to see that fruition, to see it come together to a single piece of art that all of these different people have had a hand in creating,” Crozier said.

Tickets are $10 for adults and $7.50 for non-Allegheny students and senior citizens.  Allegheny students will have free admission but it is encouraged that they make reservations online at allegheny.edu/playshop.