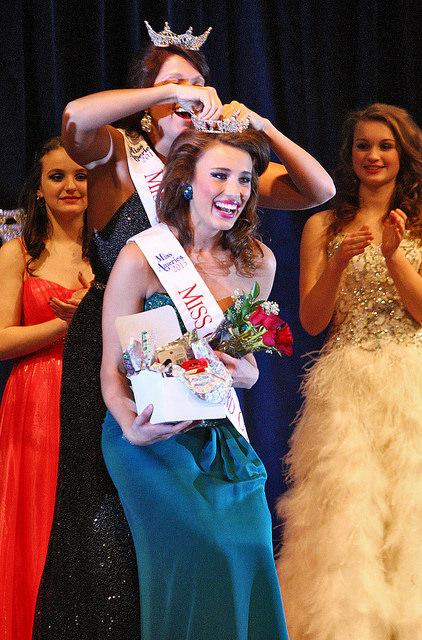 Brianna Layman, ‘16, was crowned as the new Miss Crawford County on Feb. 21.

Four competitors, six judges and a single tiara is what you would have found at Conneaut Lake Middle School on Feb. 21, 2015.

Allegheny’s very own, Brianna Layman, ’16,  took part in the Miss America pageant this past weekend. Layman is a varsity soccer athlete majoring in Biochemistry and minoring in Studio Art.

She came home with the crown and the title of Miss Crawford County.

However, that’s not the only thing she had gained from the pageant: Layman was able to work for a charitable cause. Due to the ties between the Miss America Organization and The Children’s Miracle Network.

The following is an Q&A conducted by The Campus with Brianna Layman.

The Campus: What made you want to compete in the Miss Crawford County pageant?

Brianna Layman: In order to compete in the Miss America Organization you have to fundraise for The Children’s Miracle Network and make a platform for a cause that is important to you. Since I love volunteering and fundraising already it gave me a purpose to do the pageant.

TC: What was your platform?

BL: My platform was The Art of Science: From STEM (science, technology, engineering, and math) to STEAM (science, technology, engineering, art, and math). As a student with a science major and an art minor. I believe that it is important that doubling art and science together ends in the best education possible. I am not saying everyone should be an artist or a musician, but a balanced education between the two is ideal. In order to succeed in STEM you need art to further your neurological capacity. The U.S. has dropped from the world leader board for STEM from 26th to 31st. During the same time frame the U.S. has dropped on the leaderboard for education, schools have been cutting budgets and removing art programs. We need to regain public funding for arts education in primary school to put the U.S. back on top in education. By mandating art programs at schools, the government cannot remove art from its curriculum and requirements. The arts develop a part of the brain that sciences cannot, so it is just logical.

TC: How did you incorporate your platform into the competition?

BL: There are different sections to the competition; swimsuit, evening gown, talent, one on stage question, and an interview by the panel. The most important to me is the backstage interview. During the interview six judges questioned me for ten minutes. They were able to ask anything during the time frame. Most questions revolved around the platform where I was able to answer questions on the logistics and politics of my platform. This really gave me the opportunity to showcase my cause.

TC: What do you plan to do next?

BL: I am planning to compete in the Miss America Organization competition for Miss Pennsylvania on June 10-13 at the Hilton Center for Performing Arts. Also, I am going to be speaking and making public appearances to voice my platform in a variety of places which include; The Wharton innovation Conference in Washington D.C.,  my alumni North Allegheny Senior High, and the Active Aging where I volunteer at.