Reverend believes in ‘power of the people’ 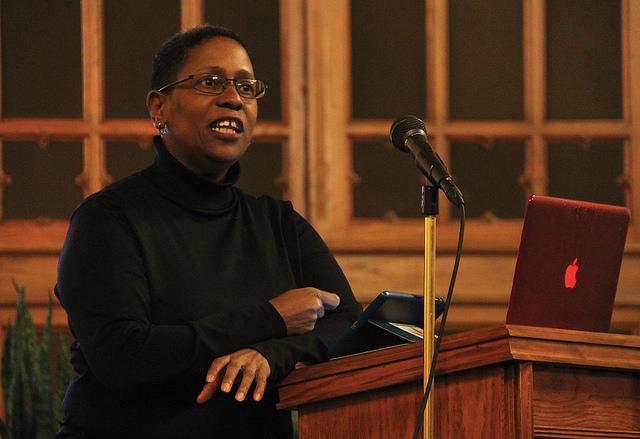 “Unless the lion has its story told, the hunter will always be glorified.”

These words belong to an African proverb and were spoken by Rev. Pamela Lightsey, associate dean for community life and lifelong learning and clinical assistant professor of contextual theology and practice at Boston University.

Lightsey delivered the Winslow Ecumenical Lecture at Ford Chapel on Thursday, Feb. 26, where she evoked the proverb as opening thoughts. The lecture was titled, “African American Yearnings and America’s Troubled Soul: Civil Rights, Ferguson, and the Color Line.”

Lightsey, a veteran of the United States Army and United Methodist minister, addressed her time spent last summer as a witness for the Reconciling Ministries Network in Ferguson, Mo. Her lecture emphasized a cultural understanding of the civil rights movement.

“Tonight I am asking you to broaden the timeline in your mind of the civil rights movement. It did not begin in the sixties, or in the fifties or in the forties. It began when Africans were put into chains on the shores of Africa to be sent across the Atlantic,” said Lightsey.

Lightsey described a sense of disenfranchisement that she observed in the African-American community in Ferguson. She displayed her own video footage of protesters circling in a dimly lit suburban street, chanting, “Hands up, don’t shoot!”

“While I was marching I was grieving because the dignities that my parents worked so hard for were under attack,” said Lightsey of her time in Ferguson.

Lightsey also spoke of a cultural disconnect between contemporary protestors and those who took place in the civil rights movement half a century ago. She urged the young adults in her crowd to familiarize themselves with past African-American voices such as W.E.B. Du Bois.

Allen Baugh, ’18, attended the lecture out of strong interest in the national conversation surrounding the civil rights movement and the 50th anniversary of the Voting Rights Act of 1965.

“I’m interested in what I think of as the civil rights movement, part two,” Baugh said. “It would be nice if more people came to events like this one, and if more people across the country engaged in this conversation.”

Lightsey ended the lecture on an emphatically optimistic note.

“I believe in democracy,” she said. “I’m not naïve to its problems, but I believe in the power of the people to come together to make change for those who are oppressed.”

Chaplain of the college Jane Ellen Nickell helped organize the event through Allegheny’s Office of Spiritual and Religious Life.

“Because Dr. Lightsey spent a significant amount of time in Ferguson, Mo., we asked that she talk about that experience to help us understand some of the dynamics of the persistent racism in the country, and by extension at Allegheny,” said Nickell. “We hope her talk will provide another lens for our campus to consider the state of race relations 50 years after the Voting Rights Act was passed, specifically as it relates to religion and faith communities.”

Lightsey was invited to Pennsylvania by Reconciling Ministries Network, a progressive group in the United Methodist Church. RMN contacted the Office of Spiritual and Religious Life to let them know that Lightsey would be leading a group event on Allegheny’s campus Friday, Feb. 27, entitled “Justice For All.”

The Friday event is scheduled to run from 9 a.m.-3 p.m. at the Tippie Alumni Center and is free of charge.