Allegheny faculty and staff reflect on study tour in Japan 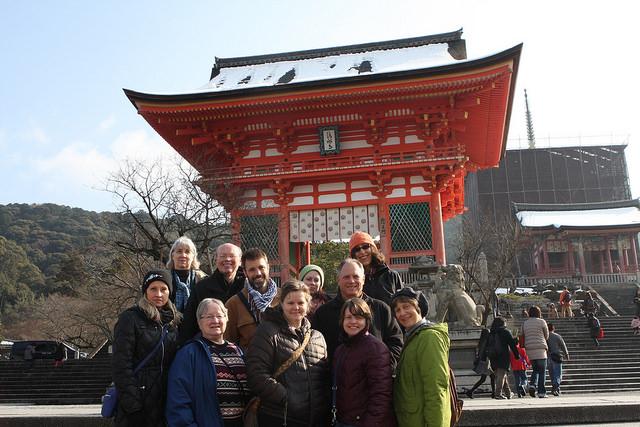 In January of 2015, a small group of faculty and staff spent a week in Japan on a study tour.

A group of faculty and staff, led by Darren Miller, assistant professor of art and gallery director, and Linda Bills, director of the library, went to Japan from Jan. 2 to Jan. 9.

Focusing on traditional and contemporary Japanese arts, the study tour group visited traditional shrines, temples, art crafts work spaces, a tea ceremony, contemporary art museums and more. These locations were in cities including Osaka, Kyoto, and Hiroshima. Throughout the weeklong trip, the group of faculty and staff feel that they gained a sense of Japanese culture and history.

“One of the things that I think would have been nice is if we had been able to get into more traditional craft spaces where artists were actually in the process of working,” said Miller. “We had access to some art studios in Hiroshima, but because of the timing of our trip and how it coincided with the New Year holiday, we didn’t really see people at work very often.”

Despite the challenge it posed, this timing had several perks for the tour. They were able to experience the engagement between Japanese people and their spiritual life. Shrines and temples are busy during the New Year holiday, flooded with families, activities, games and food.

“The atmosphere at the temples and shrines was a lot like the Crawford County Fair,” said Miller. “And everybody in the town was there, or people who live elsewhere came back to the hometown. And you really got a sense that that’s where everybody was.”

The group travelled among cities through high-speed trains, which are common and convenient to take in Japan. According to faculty and staff, it was not difficult to travel in Japanese big cities, since there were signs and maps available in both English and Japanese.

“When I was there in the 1960s, there were relatively few foreigners in Japan,” said Bills, who became the other group leader due to her previous living and studying experience in Japan.

Bills lived in Japan on two different instances, once being in Tokyo in 1964 for her first year of college, and once from 1971 to 1972 in Kyoto for her graduate school, studying the Japanese language. In between, she earned an undergraduate degree in Asian studies, specializing in Japanese history and sociology.

“I was really excited for an opportunity to share what I know and also to see how Japan looked to people from different disciplines and different points of views than myself,” Bills said.

Bills emphasized how different cultures in countries like Japan could be from an American perspective, even though the country is highly developed.

“Places like Japan have adopted western, industrial lifestyles, but all of those ways of doing things did not grow out of the same history and culture,” said Bills. “To feel that difference gives the people who work here with international students at least a sense of that, just because this person comes from an industrial country, like Germany, or Switzerland, or Italy, or Japan, or China, does not mean that they see the world the same way we do.”

Even though Bills doesn’t work directly with the students, she always keeps herself available when students need help. Considering international students all have different ideas about how a library in the United States works, Bills cooperates with the international office to help students through special sessions in the library, meetings with reference librarians and more.

“Students know that I am willing to travel to their countries and I want to experience their culture, that I am not just staying here and working with them everyday, that I really do have a love for other cultures,” said McCandless.

Shannan Mattiace, professor of political science and international studies, plans integrate the experience into her future courses, including a freshmen seminar called the politics of memory, introduction to comparative politics and advanced industrial democracies.

“Japan is an amazing case of a modern country that acts very differently from western modern countries,” said Mattiace.

After coming back from Japan, Mattiace is hoping to reach out to some Japanese students on campus, which would give her a better sense of the place they are coming from.

Besides individual goals and plans, the whole group has met once since returning to talk about differences in education in Japan and the U.S. According to Miller, the group is considering two student-centered ideas to benefit the college community.

One is to communicate with all the other faculty and staff who have been on previous study tours, including Israel, Egypt, Morocco, and a future study tour to Iceland during May of 2015.

The other idea is initiating interactive programs and activities in the campus center during lunch hours. Faculty and staff who went on the Japan study tour would table for a period of time to communicate with the college community about their experience in Japan.

“Our goal is to provide students with enough structure and support that they can feel confident going out into the world on their own, moving beyond their comfort zone, moving beyond what they know and really having an open and empathic experience with something that is profoundly different and to learn from that, about themselves and about other people,” said Miller. “That’s the goal of education.”