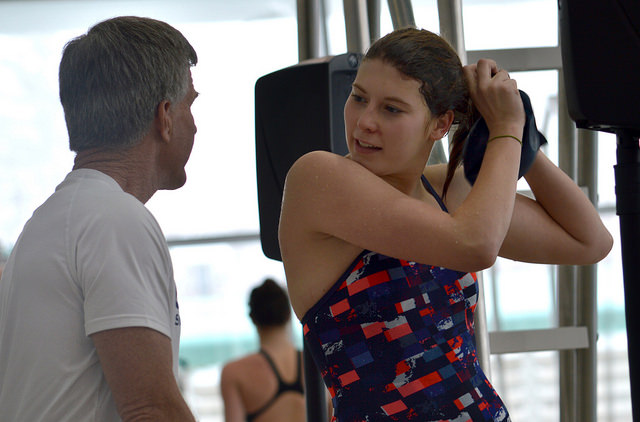 Rachel Steiner, ‘18, talks to Fred Evanoff, diving coach, about her dives at the Kenyon Fast Chance meet on Feb. 21. Steiner placed second in the event and earned a qualifying score for NCAA Regionals.

The Gator men’s and women’s swimming and diving teams ended conference competition on a high note at NCAC Championships, but a few swimmers and divers practiced an extra week to compete at the Kenyon Fast Chance Meet on Saturday, Feb. 21.

“I didn’t hit the time I wanted at conferences and I had one final shot to hit that time,” Megan Feeney, ’17, said. “It gave me an extra week of taper and our bodies were rested for a fresh swim.”

Feeney started the Fast Chance meet with a first place finish in the 200 back, placing her in the finals for the event. In finals, she finished with a time of 2:04.80 breaking the school record of 2:06.90 previously set by Jennifer Erdos in 1996. Feeney’s swim was the third record breaking swim the team had this season.

“I was really excited when I finished,” Feeney said. “It was the second time I swam the 200 back that day and it was a good way to end the season with my best time.”

Following her performance at the Fast Chance meet, Feeney was named Athlete of the Week for the second time this year.

“It’s an honor and a great way to end my sophomore season,” Feeney said.

Patrick Hollenback, ’17, said watching Feeney break the record was the best part of the meet.

“Feeney has worked hard all year and it was nice to see it pay off for her, and we saw a smile from her,” Hollenback said.

Along with Feeney’s record breaking swims, others on the team swam personal bests and supported each other along the way.
Hollenback said he decided to compete another weekend to end the season without any regrets and swim events that he did not have the chance to during dual meets.

“Conference wasn’t the best for me so to turn around and get personal bests, I got to see it pay off,” Hollenback said.

“For regionals you need two qualifying scores and I had one, so I went to get that second score I needed,” Steiner said.
Steiner scored a 415.00 on the one-meter board, placing her second in the event.

“Overall the team was strong in the conference, and I’m happy with my times because they show that my hardwork paid off,” Feeney said.