After a lifetime of playing sports, Hoeg shares experience with Gators 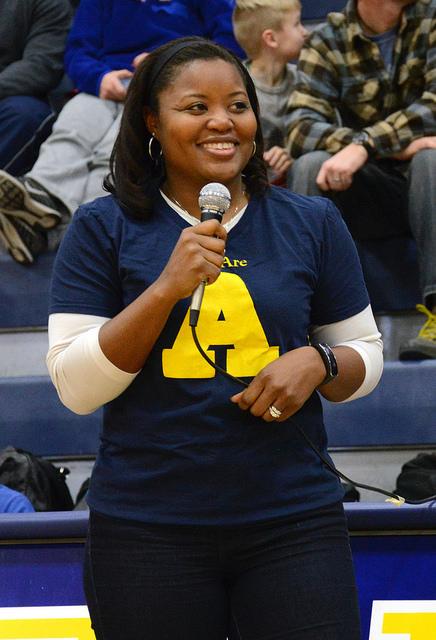 Portia Hoeg, Allegheny College Director of Athletics and Recreation, announced the unveiling of the new Chompers on Feb. 14. Hoeg has been invloved in athletics since elementary school and played basketball through college.

Allegheny’s Director of Athletics and Recreation, Portia Hoeg, knows a thing or two when it comes down to sports. Hoeg has been the Athletic Director for Allegheny for three years now.

“I think the best way I understand academic rigor is due to my upbringing,” said Hoeg. “My family was very involved in academics, my mom was a teacher and she always prioritized education, athletics was a privilege”.

Hoeg grew up in Duncanville, Texas and began playing basketball in the fifth grade.

“At the moment my mom was a huge NBA fan and they were starting a city league so I got signed up and started playing,” Hoeg said.

Hoeg immersed herself in various sports but basketball was the one to follow her through her college career.

“We did a lot of other things too,” said Hoeg. “I played soccer, I cheered and ran track.”

Hoeg attended high school at Duncanville High, where she continued her basketball career. Her senior year of high school the women’s basketball team was 40-0 and emerged as state champions in 1997. Hoeg played alongside Indiana Fever WNBA player Tamika Catchings and vividly remembers college coaches coming to their games to scout for future players.

When it came time to decide where to attend college, most of her teammates were looking into Division I schools in order to continue their career in basketball. Hoeg, on the other hand, was more focused on academics than an athletic career.

“I never knew I wanted to play in college. It was more about academics for me, I looked at a lot of [Historically Black Colleges and Universities] like [Florida Agricultural and Mechanical University] and Howard University,” said Hoeg. “I ended up attending the only school I applied to in Texas.”

“I had to look at colleges through viewbooks and brochures,” Hoeg said. “My family visited the summer before I moved in but I had never seen the school.”

Shortly after she began her freshman year, Hoeg joined the women’s basketball team.

“I started playing pickup and that’s when it hit that I was going to be on the college team,” said Hoeg.

Playing college basketball, Hoeg learned quickly how to manage her time accordingly. She was a student-athlete much like the ones she oversees today.

“We missed a lot of class but being an athlete you learn how to manage by doing homework anywhere, whether on the bus or a plane,” said Hoeg. “Learning how to work together to reach your goals teaches you teamwork.”

During her time at Trinity University, Hoeg would be a strong part of building a foundation for a team that would eventually win the national championship in 2003, two years after she graduated. Hoeg was a team leader and made a strong impact on her fellow teammates.

“One thing I can say about Portia is that she always possessed great leadership skills,” said Becky Geyer, former head coach at Trinity University. “It doesn’t surprise me that she is in college athletics, even when she was an athlete she had great qualities.”

After graduating from Trinity University, Hoeg began her career in college athletics at Smith College where she served as a special events coordinator. Continuing her journey with athletics she worked at Vassar College as an interim assistant director in 2004. After which she dedicated three years at Lake Forest College before coming to Allegheny College.

Hoeg has been honored for her service in administration. She was the December 2008 inaugural recipient of the National Association of Division III Athletic Administrators emerging athletic administrator award.

Always keeping in mind the goals of the athletic department, Hoeg strives to nurture the environment for student-athletes. She consistently attends games to support Gator athletics.

“It is always encouraging to see her in the stands supporting our team,” said Iffie Uwazie, ’16.