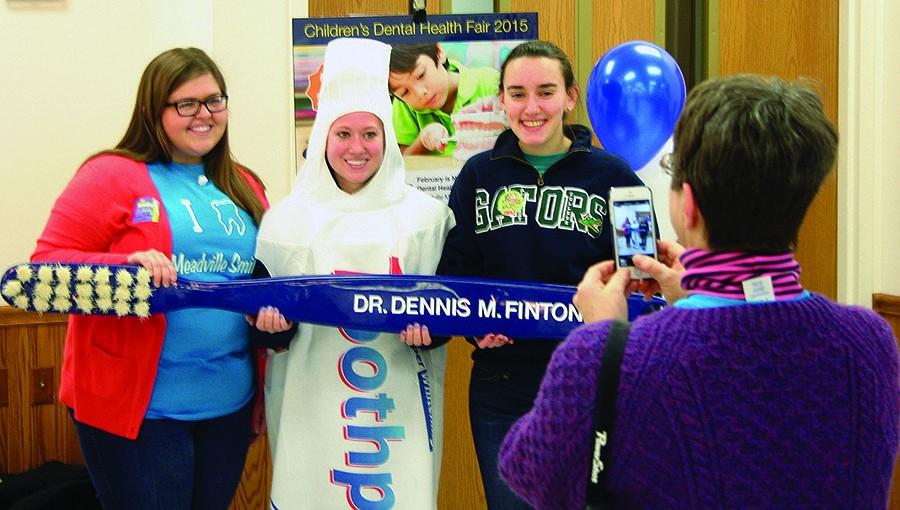 Crawford County dentists paired with various health organizations, including the Pennsylvania Department of Health, last week to make Feb. 15-21, “Through with Chew Week.”

The week was designed to raise awareness for serious health concerns that smokeless tobacco poses. The week culminated on Feb. 19 with the Great American Spit-Out, a day when smokeless tobacco users were encouraged to start a plan to quit using.

As part of the campaign, local businesses helped distribute flyers with information on the hazards of chewing tobacco, specifically targeting young adults and teens.

“Through with Chew Week” concluded with the children’s dental health fair, hosted by the Allegheny Pre-Dental Society and the Meadville Medical Center at The Lewis Davies Community Building on Park Avenue. The fair was open to children, ages 18 and under and included activities for children such as balloon animals and programing designed to promote oral hygiene awareness.

“The goal of the event is to deliver a fun and informative session, full of activities for the whole family which will provide education and resources to promote good health for the Meadville community,” said Matthew Zaborowski, ’17, co-president of the Allegheny Pre-Dental Society.

Zaborowski also explained the different stations that would be part of the fair, which included a fluoride station and a station devoted to good dental techniques hosted by the pre-dental society.

In addition to the activities for children at the fair, Zaborowski explained that there would also be a voluntary survey that would be based on dental health habits of participants, as well as a resource table which would assist parents in finding dental care for their children.

Zaborowski also expressed his hope that the fair would help to drive home the importance of dental care and how it relates to overall health and well-being.

“Oral health is one of those things that we are learning more and more about that…the better oral health that you have, it leads to better overall health,” said Zaborowski.

A smaller than expected turnout showed for the fair on Saturday, but some speculate that the severe weather conditions made it difficult for people to travel to the event.

“We have had a pretty good turnout so far, I think the snow deterred some people though,” said Taylor Sherman, ’15, co-president of the pre-dental society.

The event attracted more than thirty-five children from the Meadville community. Sherman expressed her hope that the event would go a long way in helping to bridge the gap between the Meadville and Allegheny communities.

Both Sherman and Zaborowski expressed their feelings that the event seemed to have been well received by the City of Meadville, and several community members expressed their support for the fair.

Michelle Stevens, a local resident who is currently taking college classes online, explained that her daughter had never been to a dentist because she had been unable to find one that accepted her insurance. She said that volunteers working at the fair had been able to help her find a local dentist that would accept her insurance.

Another Meadville resident and parent, Kelly Parker, an occupational therapist, expressed her support for the fair, saying that it was a wonderful idea to help promote dental hygiene, especially among children.

“The sooner we can get kids to understand the importance of good oral hygiene, the more it will carry through,” said Parker.

“This has not been a solo thing, this has been a lot of people helping out,” said Zaborowski.

The fair also asked Meadville community members to fill out a survey about their dental health habits. Zaborowski said that the pre-dental society would be using the survey to establish the society’s focus for the future.

“[The survey] is going to be used as our stepping stone for the next couple years, and like what do we need to do to improve oral health,” said Zaborowski.