APO and FIJI partner to increase the proceeds for charity 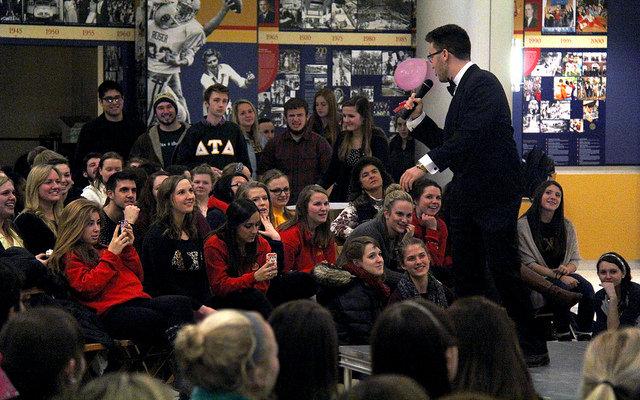 Tim Dikec, ’16, performs a song for the APO and FIJI’s Valentine’s Day Auction on Wednsday, Feb. 19. Students who were auctioned offered to do chores including dishes and shoveling snow.

The two Greek organizations decided to come together for this year’s auction in order to raise more money for charity.  The money raised at the auction went to benefit Bethesda Children’s Home and the United Service Organization.

Jake Ballinger, ’16, the public relations chair for APO, Greek Events Coordinator and Interfraternity Council Representative for FIJI Fraternity, said the event was an adaptation of APO’s Dance-A-Thon and the auction FIJI did last year.

“It came up in an APO exec meeting,” Ballinger said.  “Clara Moller [APO President] said we needed to do a philanthropy event and I was like ‘Oh well our FIJI Auction is coming up really soon’ and one of the goals we had this semester was to pair with a non-social Greek organization. APO is not one of the ten IFC or Panhel recognized fraternities or sororities and I thought well I’m in a great position to coordinate this, I’m on the exec boards for both committees so I brought it up in chapter.”

Ballinger said there was a lot of back and forth between the two organizations. After awhile everything fell into place.

Abby Conlon, ’17, a member of APO, said this year will prove to be a much more successful event for them

“Typically APO does their own philanthropy event such as dance-a-thon but because there hasn’t been a huge turnout we got permission to partner with FIJI,” Conlon said.

Forrest Stuckey, ’16, corresponding secretary of FIJI fraternity, said the partnership between the two organizations got the attention of a majority of the campus. The event had a lot of recognition from the Allegheny community.

“I’m really impressed by the participation and the support from the campus,” Stuckey said.  “I know that everyone from groups of students and various organizations all the way up to President Mullen has shown support for us which is really inspiring.”

Ballinger said this year’s auction was run a little differently than in previous years because of the amount of interest from the community.

“Participants go up on the stage, if they have a talent they will perform a talent, which is just to increase their market value, and then we will ask them an off the wall question and then bidding will start,” Ballinger said.

Stuckey said the bidding starts at whatever amount the committee’s feel is reasonable and increases based on how many people are being auctioned off.

“Anyone in the audience can bid on whatever that organization or that individual will do,” Stuckey said.  “For example Jake Ballinger, Levi and I are doing a serenade.  So if we’re bought, whoever buys us gets to pick a time and place and we’ll go and sing a song.”

Stuckey said that students volunteer their time to do a range of different things for the bidders.

“I’ve seen so many different things.  Some students are volunteering various chores, a lot of times that’s pretty much what it is things that people want to do,” Stuckey said.

Students offer to do chores including doing dishes, shoveling sidewalks or driveways, making the bidder dinner, offering people rides if they have a car or make Greek letters.