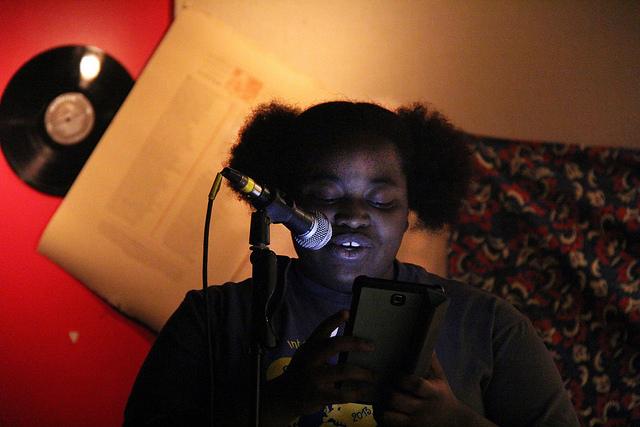 Stephanie Carson, ’16, is reading her poem off her phone screen in Grounds For Change on Monday, Feb. 16, 2015. Carson wrote her own poem named The Performance for Poetry Slam. Poetry Slam took place 7-9 p.m. on Monday, Feb. 16 in GFC and was sponsored by the Association for the Advancement of Black Culture as one of the activities throughout Black History Month.

Grounds For Change hosted a night of slam poetry for Black History Month on Monday, Feb. 16. The event was an opportunity for students to present their work, whether that be poetry, music, artwork  or another form of expression.

Autumn Parker, ’16, shared a poem at the event.

“We invited anyone inside or outside of our organization (ABC) to share any talent that they had.  GFC was kind enough to host our event and we had an open tab,” Parker said. “We had a good seven or eight people share their poems and share what was on their hearts.”

The film follows the story of Martin Luther King Jr., played by David Oyelowo, as he marches alongside hundreds of others in protest for the right to vote. It follows the historic march from Selma, Alabama to Montgomery and the opposition they faced.

The movie was brought to campus  through the combined efforts of the Offices of the President, the Associate Provost for Diversity, and The Center for Intercultural Advancement and Student Success.

Student volunteers will be serving as ushers for before the screenings begin.

“The Civic Engagement Office was definitely involved in bringing it to campus and getting the event together with ABC and CIASS,” said Imani Prince, ’16.

At the conclusion of the film on Friday, there will be an opportunity for students to engage in discussion about the film in the Campus Center room 206.

Izoduwa Idehen-Amadasun, ’18, said even though she’s already seen the film before she’s excited for the chance to see it again.

“I want to watch it again, I would watch it both times but I have to cook on Saturday,” said Idehen-Amadasun.

“I thought it was a really good movie….It also showed some things a lot of people might not have known,” Idehen-Amadasun said.