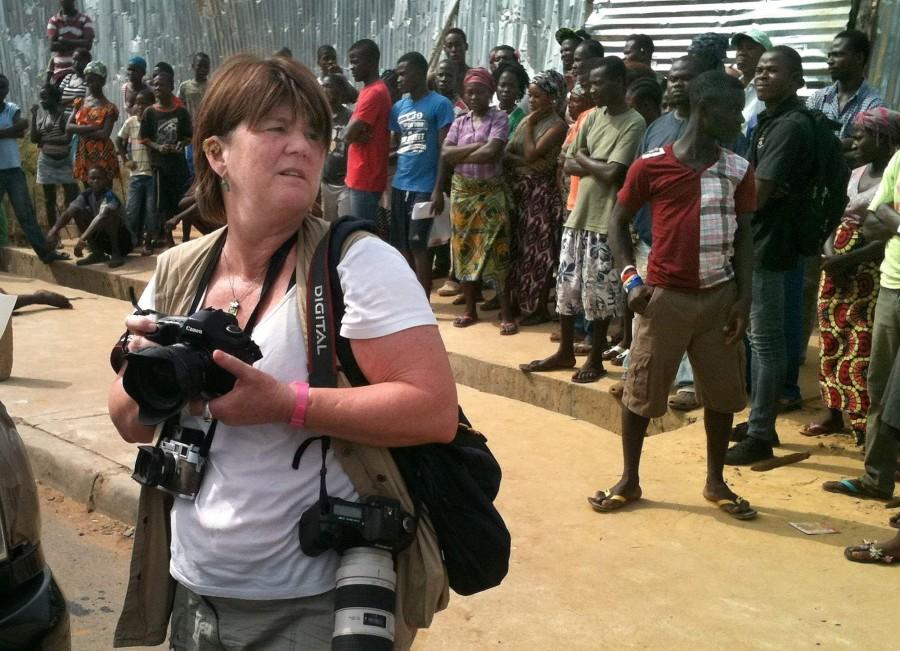 Cheryl Hatch follows the Liberian Red Cross as they picked up dead bodies for transportation to cemetery.

After a long semester, most of Allegheny’s professors and students look forward to winter break as a time of rest. Visiting assistant professor of journalism in the public interest, Cheryl Hatch spent her four weeks off not with family and friends but with her camera and soldiers.

In December 2014, Hatch travelled to Liberia with writer and U.S. Air Force veteran, Brian Castner, to cover the U.S. military’s  collaboration with the Liberian government and their collective effort to fight Ebola.

Hatch and Castner met in September 2014 at the Combat Paper Project, a conference Allegheny hosted on campus.

“I met Cheryl while she was on her way to yoga that morning, but we just started talking. We hit it off in that we had a lot of similar backgrounds,” said Castner. “She had embedded with the U.S. military in Afghanistan, I was a veteran. She had grown up a military brat. We had been to a lot of the same places.”

Castner served in the U.S. Air Force as a commander of bomb disposal squads during his tours in Iraq.

In 1990 Hatch went to Liberia alone to cover the country’s civil war. It was her first independent journalism project. “It was a brutal and horrible story to cover the first time. I questioned going back [to Liberia]. But this was a great story,” Hatch said.

Their conversation shifted to Ebola and the media’s coverage of the outbreak.

“We talked about that and how large parts of the story were not being covered, including what the U.S. military was going to do.

They had recently announced the 101st Airborne would deploy. The 101 was my last unit that I supported in Iraq so I had a personal connection,” said Castner.

Eventually they began talking about traveling to Liberia to cover the story and Castner asked Hatch for some logistic advice on organizing a reporting trip abroad.

“As we got talking about her offering me advice on how to do my own trip, it turned into ‘hey why don’t we just go together?’” said Castner. “I remember saying to her, ‘you gotta be careful’ because when I get an idea in my head I have trouble letting it go. It turns out she’s the same way. We said at the time wouldn’t it be funny if this chat in the Oddfellows parking lot turned into something and of course, it did.”

Initially, the story was focused on covering what it meant to have an infantry unit fight Ebola. But when they arrived, the troops had successfully built all of the ETUs and completed the health care training.

“It is part of the natural journalism process. The story that you pitch to an editor is not always what you discover, which is why you do the reporting,” said Castner.

This proved to be a challenge for Hatch because there was no longer anything to photograph.

“Visually for me, it was incredibly challenging,” said Hatch.

After realizing their initial story was winding down, their natural curiosity took over and they began to look for another story. The story shifted and they looked to the Liberian Red Cross and the actions they were taking. Hatch and Castner traveled with the Red Cross for two days as they picked up bodies.

Despite the death and disease control that Hatch and Castner were covering, both said they were struck by the hope and positivity of the Liberian people.

“It’s not like life stopped over there. Things got bad, people were afraid, are afraid, they’re still afraid,” said Castner. “But life goes on and there’s still joy and theres still worshipping at church and hanging out on the beach and all the things of life still continue, despite this terrible disease.”

Hatch and Castner were in Liberia on Watch Night or New Year’s Eve, which is an important holiday in Liberia. The president of Liberia, Ellen Johnson Sirleaf, lifted the curfew that had been in place since the outbreak to allow people to go to church and celebrate.

Traditionally, Watch Night is a huge night of celebration and it is filled with singing, dancing and praising. At midnight, in past years people in the churches would stop and hug and kiss each other but this year they opted to instead stand in place and clap for precautionary reasons.

“This year in the church it was really clear we don’t hug, we don’t kiss, you stand in place. You jump up and down but you don’t touch anyone,” said Hatch.

However, despite the differences of this year’s celebration Hatch said that there was an overwhelming feeling of hope.

“The people in the church were so grateful, thanking God for bringing them to a new year and protecting their family,” said Hatch. “So even in the middle of all this loss, and lots of people had lost people, there was still an affirmation of what was good and looking forward with hope.”

Editor’s Note: Cheryl Hatch is the faculty adviser for The Campus.