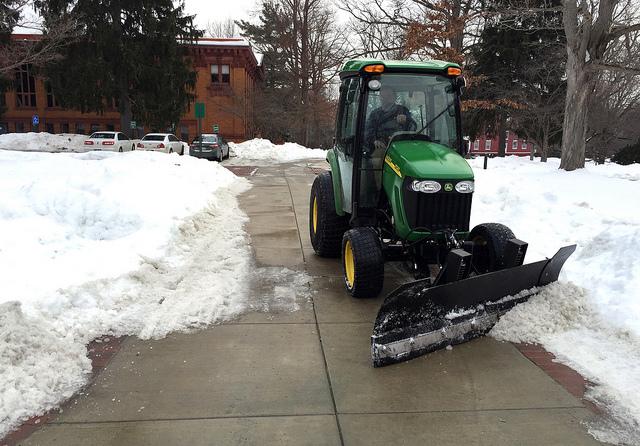 Allegheny College Physical Plant is responsible for the operations, maintenance, renovations and construction of all buildings, grounds and utilities on campus, with winter maintenance as a top priority. According to the college’s webpage, “These services are provided to develop and maintain a functional, attractive and safe environment conducive to conducive to learning and to support the College’s tradition of excellence.” The department employs 33 staff, including five administrators. With the heavy snowfall, crews were working overtime to clear the snow from campus.

“We had a few of us this past week that logged close to 70 hours,” said Cliff Willis, director of the physical plant.

According to Willis, the college’s grounds consist of five miles of roads, 20 acres of parking and more than 10 miles of sidewalks with more than 500 steps.

Willis explained that the plant generally begins work at around 6 a.m., but on days with heavy snow or ice, they will begin work as early as 4 a.m. He said that workers for the physical plant are either operating equipment such as plows or are using shovels to clear walkways.

“Perimeter walkways is the first thing we go after, then we work on high traffic buildings: Wise Center, campus center, Brooks,” said Willis. “Then we do work around residence halls and parking lots.”

In addition to the challenges presented by the amount of snow, both Willis and Geiger explained that the geography of the campus makes clearing the snow more challenging because there are limited places to move snow.

“When the snow is spread out, typically we are able to push it off to the side and it will melt, and we don’t lose any parking spaces. When we get hit the way we have this last week we actually have to truck that snow out to behind Robertson to the Ben Avon Street site,” said Willis.

Willis also explained that this year the physical plant has started to employ a new strategy in clearing sidewalks.

Though the physical plant has access to snow removal equipment like Bobcats, Willis admitted that the plant only possesses one vehicle with a salt spreader. Despite this, Willis maintained that the plant is neither underfunded nor understaffed.

As foreman of the crews working to remove snow, Geiger expressed his belief that they have handled the situation as well as could have been expected.

“It was as fast and hard as we could go with the weather the way it was,” said Geiger.

In addition to their snow removal duties, Willis explained that his crews had been doing their best to assist students and faculty stuck because of the snow.

“The other thing…is the guys are on call when someone gets stuck. If somebody has a problem, we stop what we are normally doing and we go deal with that,” said Willis.

Willis admitted that multiple parking lots are still clogged with snow and that it may become necessary to work with security to have students move their cars, so that the plant may properly plow the lots.

Despite the efforts of physical plant, its snow removal efforts have come under heavy scrutiny from students.

“It doesn’t look like they have done anything,” said Emily Christ, ’15.

“The ice out there, it’s a hazard to people’s health,” said Katie Mirigliano, ’16.

Willis expressed that the physical plant is currently looking into hiring outside help to assist with heavier snow falls.