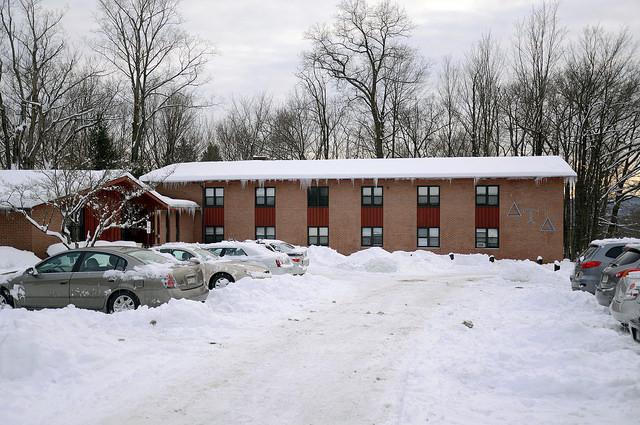 As a plan that has been in the works for the past couple of years, the members of Delta Tau Delta will begin renovations to the chapter’s house sometime in late March. Initially sparked by discussions between DTD alumni and current members, the renovation aims to build a new wing to the house, adding 11 rooms and a bathroom. Additionally, the renovation will include refurbishing the interior and the addition of new common areas.

With housing like North Village I and II being more recent additions to campus, the members and alumni saw competition for nicer places where DTD members may choose to live instead of the house. However, the contract the house has with the college is that the fraternity must maintain a house population of 33. Otherwise, the rooms would be available for college use as a college-owned facility.

As explained by Matt Betush, ’06, visiting professor of chemistry and co-adviser to DTD, the process of renovating the house began as a feasibility study, to determine if the necessary money could be raised to begin the project.

From there, the DTD House Corporation, a group of alumni from DTD’s Alpha chapter, began a fundraising campaign. Initially, the project was planned to be a $2 million project, half coming from DTD and half coming from the college. Ultimately, though, the college negotiated and then approved a $1.2 million project, each party responsible for $600,000.

In order to raise the funds, a capital campaign began with Allegheny alumnus Keith Steiner, ’73, who served as the campaign’s chairman. The chapter hired an outside consulting firm, Kansas-based Pennington and Company, specializing in fundraising money for housing for fraternities and sororities across the country.

“Even though I made some trips to Pittsburgh and Cleveland and Columbus, the fundraising consultant has people around the country, like Florida and California,” Steiner said. “They really extended our reach and helped us to be successful.”

Class agents, an individual chosen from each class year of DTD’s alumni, was then responsible for getting in contact with other members that attended Allegheny in order to raise the money. According to Steiner, donations and gifts were received from 180 out of approximately 800-900 DTD alumni.

Once DTD had received 80 percent of the $600,000 needed for its half of the project, the renovations could begin, as soon as it was approved by the Finance and Facilities Committee and the Budget and Finance Committee of the Board of Trustees.

When building begins, the initial focus will be the addition of the new wing, slated to start in late March with excavation and laying the foundation. Although students will currently live in the house, the DTD members do not foresee this to be a severe inconvenience, according to Brogan McGowan, ’16 and current DTD president.

“Most of the work they’ll be doing is digging the foundation and laying the foundation and once that’s done, the house will go up pretty quick,” McGowan said. “That, in itself, will take a month and that is a little more quiet. I think the biggest thing, if anything, is that it’ll be an eyesore and it might be a little muddy just from all the dirt being moved around.”

Following Commencement, workers will have the opportunity to renovate the interior spaces without disrupting student life, as that was a concern for current members living in the house.

“We’ll excavate now and disrupt a little bit at the end of this semester instead of not having a place for people to move into at the beginning of the next [academic] year,” Mike Petronek, ’15 and previous DTD president, said. “We’d rather have a finished project at the start of next year instead of having to jumble things up in the fall semester.”

By adding another wing and 11 rooms to the current 22 rooms, the idea is that it will create 33 singles for the minimum number of students required to live there, but according to McGowan, this is subject to change until the actual interior renovations are completed.

However, had DTD not fundraised as well as they had, the house renovations would not have been the highest priority for the college, despite the fact that Allegheny is partially responsible for the property as it is partly college-owned, a notion that Steiner and other alumni understood going into the fundraising campaign.

“Their success at fundraising allowed us to start here but it’s part of a bigger plan for beginning to address our residence life needs in general,” Sue Gaylor, executive vice president and chief operating officer of the college, said.

Despite the dedicated push from DTD for their own house, Allegheny began an assessment of the residence halls which took place from Dec. 2013 to Jan. 2014, according to Gaylor. When the college is allowed to assume more institutional debt in 2016, renovations that are considered highest priority will be the Caflisch, Brooks and Walker dorms.

Regardless, the hope is that the renovations to the DTD house will create a renewed excitement and desire for members to live in the house.