New vice president and chief of staff appointed to office 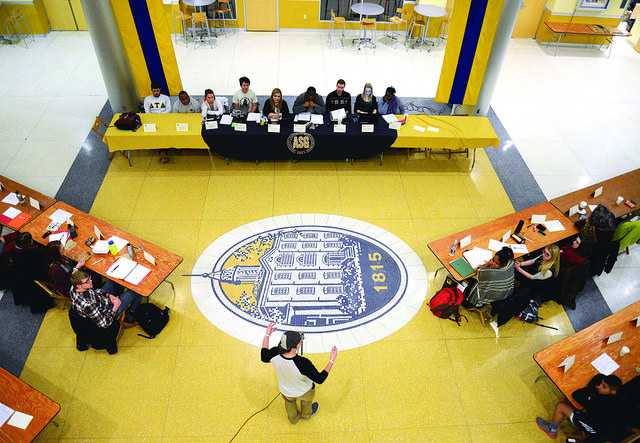 This article was updated to correct the spelling of Nicholas Tortorici’s name.

According to the minutes from the Nov. 4, general meeting, McGowan cited his recent involvement in an incident that “…broke college policy and which resulted in a disciplinary sanction.” He stated that because of this incident, he felt he could no longer, in good conscious, hold members of ASG to a moral standard.

“If I was going to be placed in a position where I put myself to be disciplined and put on probation, it wasn’t very appropriate for me to be holding people to a particular standard if I couldn’t do that for myself,” said McGowan.

“A main goal that we all need to pursue within ASG is being able to communicate better as an organization and that’s both inside and outside of the organization. So we want to pursue a better dialog between the administrative function of ASG and the more representative and senatorial function,” said Tortorici.

Tortorici also explained that his hope is that ASG can become a more accessible organization for students to serve as elected officials.

“We also want to see in ASG, where if you came to ASG tomorrow and wanted to fill a position, you could do that and you could do it effectively,” said Tortorici.

In just the past few months, Tortorici said, ASG has worked to make the Allegheny College community stronger and improve the overall quality of student life. He said that one issue they have addressed is campus safety by conducting a “light walk” to ascertain what areas on campus require more illumination.

“It’s another proactive step that ASG has taken to ensure that the student experience here is something which is worthwhile and competitive when it comes to other schools,” said Tortorici.

Tortorici also expressed his satisfaction with the seamless transition that occurred in the wake of McGowan’s resignation. However, this was not the only transition of leadership in ASG last semester.

Two weeks following McGowan’s resignation on Nov. 18, 2014, Autumn Vogel, ’15, resigned as ASG vice president at the start of the general meeting. Vogel cited the inability to implement change within the current structure of the organization as her primary motivation for her resignation.

“We were fighting for student voice and transparency, but the nature of the structure of our organization wasn’t really allowing for that to happen,” said Vogel. “If you want something to be changed and get done, then you are really passionate about it and care about it. It can really take a toll on you when there are so many roadblocks.”

Vogel also expressed her discomfort in the job she performed as vice president. Vogel felt her main responsibility was to prevent people from speaking. She explained that a lot of this was the enforcement of the Robert’s Rules of Order and that cutting people off who were in violation of the rules made it harder for people to speak out.

“I think that the rules were set up in such a way that it did silence voices,” said Vogel.

Vogel also expressed her less than optimistic view on the direction in which ASG is moving, however she admitted she has not kept close enough tabs on the organization since her resignation to say for sure.

“There’s not a whole lot of evidence it is moving either way,” said Vogel.

Following Vogel’s resignation, Mary Grace Warren, ’15, a four-year member of ASG, was approved as the new vice president by the senate on Jan. 20. Warren said that in the short time she has been vice president she has been working with other ASG members to draft a new constitution, among other things.

The proposed constitution, which has not yet been adopted, is meant to improve modes of communication within ASG and includes such measures as decreasing senate and cabinet sizes.

“We also are working on more specific election bylaws, financial procedure bylaws and then also one of the bigger things that we are doing right now is the granted powers, because right now we are kind of in a…questioning stage of…what powers ASG has,” said Warren

Both Warren and Tortorici expressed their hope that students would continue to be more involved, either by reaching out to their respective senators, coming to ASG’s open office hours on Fridays from 12-2 p.m. to voice any concerns or even running for office in the upcoming ASG elections.

Warren explained that the date of the ASG elections has not been set, but that they will be held, most likely, in the next month.