Gator baseball gives back to community, hosts Winter Camp for local kids to learn the game 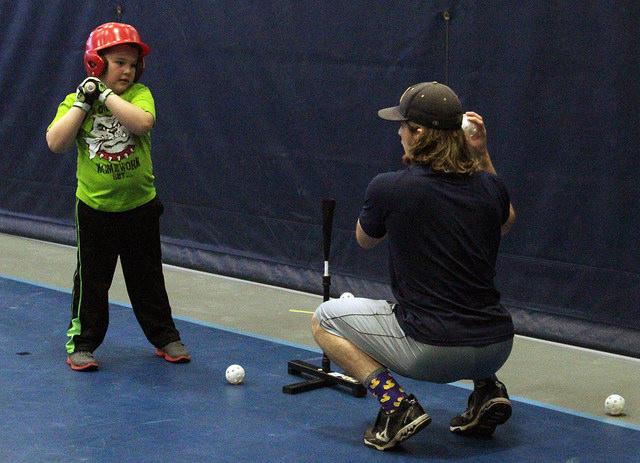 The men’s baseball team is hosting their annual Winter Camp for the children in the Meadville area.

“The camp is an opportunity to give back to kids,” Ben Murray, ’15, said. “We remember when we were their age and players wanted to be involved with us, putting a smile on a kid’s face and helping them become a better baseball player is great.”

According to Kelly Swiney, head coach, the camp is a fundraiser for the team’s trip to Florida over spring break in addition to providing an opportunity for the team to give back to the community.

“Learning how to vocalize what you’ve learned is really important,” Paul Vojtek, ’15, said. “The kids are sponges and take everything in, we were in their spot and appreciated the help of older players.”

Vojtek added that the kids are always smiling and listening because they respect the older players and want to hear what they are saying.

The younger kids learn the basics of hitting and pitching, and the older kids focus more on specifics.

“The kids have fun and learn basic baseball skills that will help them in the spring or summer leagues. They meet friends that they will play with and look up to the college players,” Swiney said.

In the past few years the camp has developed and grown.

“We have had a lot more campers in the past few years. I attribute that to our assistant coach who is from Saegertown and knows the community,” Swiney said. “Word of mouth from kids who have come in the past also helps.”

Vojtek said some of the kids who started four years ago that could not do much are getting better and can now play baseball.

“As a coach, it’s fun to see the players have to explain and be the coaches themselves. They are teaching the kids and have to know what they’re talking about,” Swiney said.

Murray said talking about the basic mechanics and how the kids are playing makes the team think about how they are personally playing.

“Any time around the game is an opportunity to learn, as a player we take that for granted,” Murray said.

Many of the players on the team participated in similar camps as kids and bring those experiences into their time helping with the Winter Camp.

“The interaction with kids is the most important part and the most fun,” Swiney said. “It’s great for them to pick up knowledge, both basics and complex things.”

The players work one on one with the kids and help them get better at hitting and pitching, telling them ways to improve their techniques.

“We always reiterate that it’s only a game. It doesn’t matter how stressful it gets up on the mound or at bat, it’s meant to be fun even if failing means the end of the game,” Vojtek said.

The rest of the team agrees with Vojtek, they enjoy the competition and the challenge of college baseball.

“Baseball is supposed to be fun,” Murray said.

In addition to playing baseball, campers and players discussed other sports topics, such as the Super Bowl.

“The camp always runs on Super Bowl Sunday, it’s fun to listen to the kids talk about who is their favorite team and who’s going to win the game,” Swiney said.

The Gator baseball team is in preseason practices in preparation for their first game on Feb. 21 against John Carroll University.