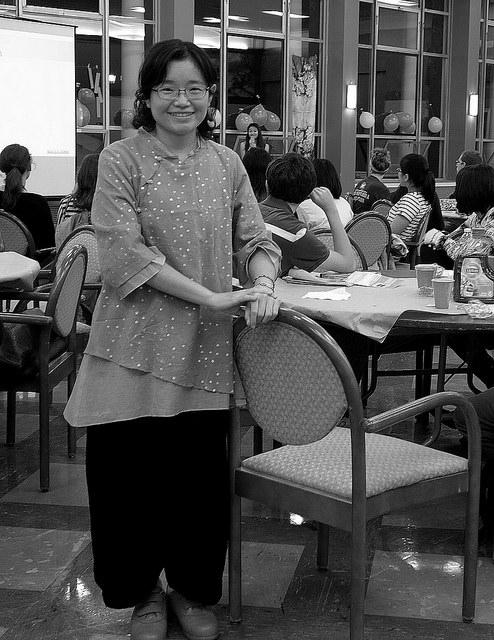 Yuchun Huang has noticed a distinct independent nature in students since coming to America and feels it gives many of them confidence.

In Taiwan, few students would think of leaning back and putting their feet on the desk in class. Educators may frown upon the slouching students and think they are not taking the class seriously. However, Yu-chun Huang, a Chinese international student, said she has seen this since coming to America, which initially surprised her. She attributed this behavior to the individualistic nature of Americans.

She believes that in America, it is more acceptable to  slouch in class because more professors see students as responsible for their own behavior and quality of learning. Conversely, in Taiwan the professors may feel it is their responsibility to prevent such behavior. Huang said that students frequently go places on their own and complete tasks on their own, whereas in Taiwan students would work or travel together.

As well, Huang has noticed that people seem to be happier with who they are, particularly those who do not fit conventional ideas of body image.

“You don’t really need to worry about what others think about you,” Huang explained. “You can dress how you want. You can walk how you want.”

Vesta Silva, department chair of communication arts and Huang’s advanced public speech professor, has found that there are many things American students have been taught that they take for granted. Doing presentations in other countries requires different things of students than in America and American students often think these things are implied.

“When international students are comfortable contributing to class discussions it can have an enormously positive impact,” Silva said. “Specifically, it can highlight the ways that ideas, customs, or norms that we take for granted as ‘natural’ or ‘common sense’ are in fact deeply cultural and particular.”

As well as her social and educational surprises, Huang was apprehensive about experiencing Meadville weather. Being from Taiwan, an island off of the southeast coast of China, Huang is used to winter temperatures only falling to about 55 degrees Fahrenheit.

Though Huang is still not enjoying the weather, she does feel she has become more tolerant of it. She is used to regularly wearing layers and tries to stay inside as much as she can to avoid the cold and snow.

The Allex Foundation is a program that allows universities to connect with native Chinese or Japanese speakers to create a more effective language program at the university. Allegheny College was connected to Huang through this foundation.

Huang was chosen by the Allex foundation from a pool of others who also had a bachelor’s degree and was also chosen because of her test scores.

When her semester in America draws to a close, Huang plans on going back to Taiwan and teaching full-time.

Samantha Wanko, ’15, who took advanced Chinese language and culture I with Huang, believes that her experience was enhanced because the class was taught by a native Chinese speaker.

“I think it is more authentic coming from an international teacher than, let’s say, a teacher who understands the culture and language but is not native to that region,” she said. “I know that in my Chinese language class with Professor Huang she would include cultural insights into Chinese and Taiwanese culture that you might not get from the average teacher.”