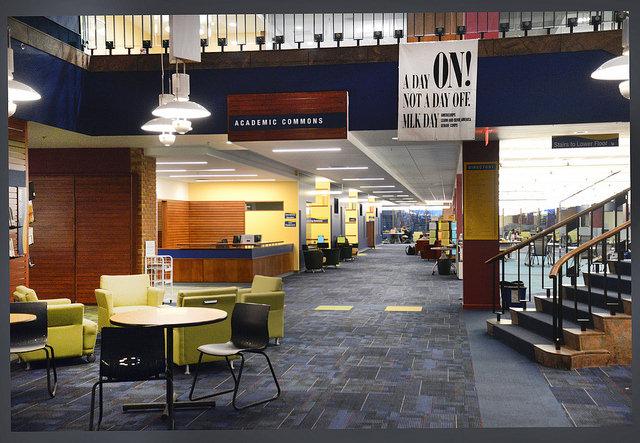 Following eight months of construction, the Pelletier library finished renovations in early January and officially moved the academic commons into the building. Since May 2014, construction crews have been remodeling the building to make it a more viable space for library operations, the Gateway, the Learning Commons and student space, all four of which comprise the academic commons.

The overarching idea surrounding the academic commons is to create an accessible space for students that incorporates academics, co-curriculars and post-grad life into one facet of learning, according to Linda Bills, library director.

“The library services and Learning Commons, those are services to help you succeed in your classes,” said Bills. “The other services that are here now are about succeeding beyond your classes, it’s career education, it’s civic engagement, it’s international studies. So it’s not tied directly to ‘Can I pass History 101?’ it’s tied to, ‘Can I take my experience at Allegheny and leverage it into a career that’s exciting and rewarding to me?’

“In the past, those services were available to you just as they are now, just as intensely and in a dedicated manner, they weren’t associated as closely with your academic work. What we’re trying to do with the academic commons we’re building here is to say, ‘All of this is the same thing. We shouldn’t have class work ‘here’ and life ‘here,’ we should have life and classwork working together.’”

“What we’ve seen when we brought the Learning Commons into the building, the use of the building has gone way up,” said Holmgren. “What was interesting was the use of library services went up, students checked out more books after the renovations. The books didn’t change any but they were using the resources more because they are in the building.”

Holmgren explained the introduction of the Learning Commons brought more foot traffic to the library and people began utilizing the available sources more. He hopes this same phenomena will occur with the addition of the academic commons, bringing more students to a space housing a larger variety of resources.

“When we created our Learning Commons in 2004, we were one of the first comprehensive academic support centers at a college,” said Holmgren. “At the time, that was a grounding new concept. It was really a trendsetter. I think the Gateway, in some ways, lots of schools are doing something like it, I think our project is more ambitious than many and more comprehensive. We’re bringing in a lot more services, so it’s more holistic. We’re really bringing in a richer array of services. You can’t tell when you walk down the hall when you’ve left career education and gone into the LC.”

Holmgren admitted that there are both positives and negatives to the not being able to distinguish among the 37 offices on the main floor of Pelletier. By having everything so close-knit, it makes resources more readily available among students and staff and allows for more accessible collaboratory efforts. But other handedly, it can be difficult to navigate the academic commons and its offices. Both Bills and Holmgren emphasized that there will be more work done to improve the efficiency of navigating the offices. They said to expect more signs and color-coding in the next few weeks.

“We ask that the campus be patient, we do know where everything is, we’re just working out how to communicate that with you efficiently, and I suspect that will take a couple weeks to sort out,” said Bills.

Overall, Bills believes the campus reaction to the aesthetics of the renovations is a positive one.

Apart from the physical changes, Bills does note that many are still unsure of the purpose of the academic commons.

“Integrating the library with the Gateway and the Learning Commons, I don’t think there’s any argument about it. I think a lot of people aren’t really aware of what that is. The faculty that are aware of it, I think, are okay with it,” said Bills. “I think it varies from, ‘What did you say about that?’ to ‘Oh that’s a good idea!’”

From the results of an online poll created by The Campus, student reaction to the newly renovated library is mixed.

Jackie Verrecchia, ’17, voiced her concern that there is less room for group work, while Dalton Johnson, ’15, thought the money used to renovate the library could have been put to better use.

“It looks nice. It was a waste of time, expended tons of money. I don’t think it will benefit anyone by just putting in offices, but it looks nice,” voiced Johnson.

Other students are more excited about the possibilities the academic commons will lend itself to. Molly Thomasson, ’15, wrote that the offices can add extra noise and a distraction to studying on the main floor but recognized the space as a good common location for such a varied number of services.

“I really like it! It has new cubby areas for students to work, has more resources such as Gateway located in a more central are and it definitely has a more modern feel,” wrote Krista Derdowski, ’16.

Despite student concern, Bills and Holmgren believe the renovations will be beneficial in creating an efficient learning environment. Bills explained that a priority in designing the building was to keep if not increase student space.

Holmgren echoed Bills thoughts on the priority of student space.

“I firmly believe that the real value for students is to create a space where they can study, collaborate and access resources for their projects,” said Holmgren. “Our goal has been to create a more vibrant space for students in their learning.”

Constructurally, the academic commons is complete, but Bills believes this project to be an ongoing learning experience.

“It’s an aspiration. It’s a very achievable aspiration. It’s also an idea in process. We’re doing something where we’re not entirely sure what the end result is going to be. We know what we would like the effect to be, how exactly that will be achieved is something will be an ongoing project,” said Bills. “It’s like the three-body problem in physics, you can’t predict what’s going to happen, but we’re confident it’s going to be good. It’s not something where we’re ever going to say, ‘It’s done.’ It’s an opportunity for constant improvement.”