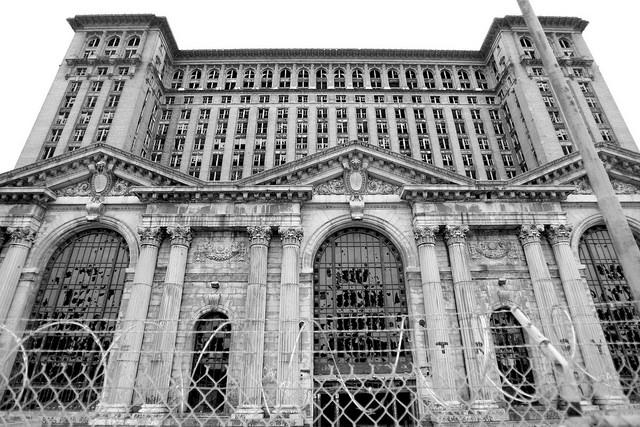 Detroit’s central station sent out its last train in 1988. Abandoned, the windows are almost all broken and the building is enclosed with a metal fence and barbed wire. The central station has become an accurate representation of the property quality degrading in Detroit.

Timothy Hodge, former visiting assistant professor of economics at Allegheny in the fall of 2014, has been conducting research on statewide property tax policies in Michigan since 2008.

“In my career, my goal is to see how these policies work and how to change them,” Hodge said.

Hodge carried his passion for economics with him into the classroom as he taught urban economics, which Phoenix Cooke, ’15, took in spring of 2014.

“Professor Hodge’s enthusiasm and passion for urban economics had engaged me from day one,” Cooke said. “I never really understood how to apply economics to urban environments, and his class clarified this for me through teaching each concept clearly and in depth.”

With his goal of affecting policy decisions, Hodge has found that the greatest challenge is collecting the data and finding time for the extensive research his projects require. However, Hodge is aware it is necessary if he is to succeed in getting ineffective policies changed, and has instilled that sense of importance in Cook.

“In regards to legislation, economics has taught me a lot about how policy works and interacts with governmental structures,” Cooke said. “Economists are essential for legislative bodies to establish policies that will be effective in the economy and not create laws that fall short of success because the legislative body is lacking knowledge in economics.”

Hodge worked with a large number of other researchers throughout the writing of his papers, one of those being Mark Skidmore, the Betty and David Morris chair in state and local government finance and policy and professor of agricultural economics at Michigan State University.

“The past several years we’ve worked extensively together on the collapse of the Detroit real estate market and its implications for the property tax,” Skidmore said. “More generally, we have also worked together to evaluate statewide property tax policies here in Michigan.”

“[T]he research we conducted to evaluate severe over assessment of property in Detroit made its way into the media,” Skidmore said. “The State Tax Commission became aware and was forced to get involved and conduct an independent evaluation.”

In recent years, as much as 52 percent of people in Detroit have stopped paying their property taxes, and property tax appeals are becoming more common. Property taxes are determined based on the property value, but Hodge’s research showed that there were frequently inequities in the assessments of the values. For instance, people could be paying as much in property taxes as they paid for their homes. According to Hodge, property values had dropped 59 percent since the recession in 2008, but the value assessments had not. However, Michigan law requires that assessments are made at 50 percent market value.

Due to the disproportionate taxes and property value, the population of Michigan has significantly decreased. At its height in the 1950s, Michigan’s population was about 1.8 million people in 138 square miles. Now its down to half that. Compared to New York City, which has eight million people in 300 square miles, Detroit has become barren, with about 20,000 less people per square mile than New York City. This decrease in population has had major effects on the economy as there are so many less people stimulating it. This makes the importance of getting property taxes down to fair values again crucial for the state of Michigan’s economy.

Since the investigations began, the mayor of Detroit, Mike Duggan, has announced that assessment in some places will be lowered by as much as 30% percent until they can reassess the property values.

“I think it is fair to say that had this research not revealed the problem in a clear and systematic way, this change may not have happened,” Skidmore commented. “At a minimum, it would not have happened so soon. [I]f one wanted to quantify the impact, one could use the tax change, which would be in the range of $30 million in property owner tax savings annually.”

Having been originally from only 45 miles outside of Detroit, the research Hodge has been conducting has been personal. He hopes that in the future he will see Michigan recover from its property tax equity issues, and plans next to examine vacancy issues with students during the summer of 2015.