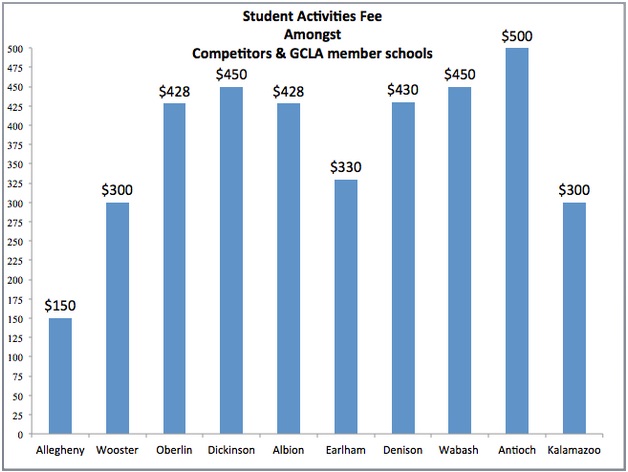 Allegheny ranks the lowest of its competitors on the students activities fee. Members of the Great Lakes College Association have SAFs that are double or triple that of Allegheny.

Allegheny Student Government cabinet members presented a proposal on Tuesday, Dec. 2, to ASG to increase the Student Activities Fee. Last time the SAF was increased was during the 2011-2012 fiscal year.

ASG’s budget is determined each year by the SAF. Each student, currently, pays a $150 SAF. The SAF multiplied by the number of students enrolled is how ASG’s budget is allocated. This year, ASG’s entire budget is $293,410.75.

“One of the things that should be made clear is that it’s a proposal, and it’s a proposal that’s been made in conjunction with a lot of people but mainly myself, Mary Grace, and Miguel,” Hailsham said. “So it’s not necessarily all of ASG has decided to do this. The main thing was seeing the potential to do a lot of really great, impactful things on our campus and needing the capital to do so.”

“There’s going to be a lot of procedures that will need to be in place with such a large amount of money,” Hailsham said. “Having a two-year phasing in process really allows for us to give it the care it needs to develop the proper procedures to make sure that it’s not being abused.”

In the presentation, Liriano pointed out that out of the 10 Greater Lakes College Association schools and other schools Allegheny is competitive with, Allegheny College has the lowest SAF by $150. If Allegheny were to double its current SAF to $300, it still would be tied with Wooster with the smallest SAF.

With the increase in funds, the proposal includes different things the new budget could fund including a community fund grant, shuttle expenses for students leaving and coming back from break, and a campus wide ball.

“In the proposal you’ll see things are really big picture oriented,” Hailsham said. “We outlined what will be possibly a ‘Gator of the Year’ in which we bring in a speaker to speak to us about their experience and how their experiences tie into this institution. We need capital to do that and the possibility to bring in someone like Anderson Cooper, someone like Soledad O’Brien, pick any famous researcher, to our campus is amazing. I think we don’t have enough experiences like that. So to provide an experience like that every single year to students would be an amazing thing.

“In addition to that we recognize some services students should already be provided. We outlined the opportunity for a shuttle for students that are going home on winter break and spring break that can’t afford to front the $60 each time on top of their plane ticket. So we really want to make sure that’s accessible.”

According to Liriano, the feedback has been more critical in how the specific budget will be implemented around campus.

During the ASG meeting on Dec. 2, senators and constituents had the opportunity to express their concerns, affirmations, and critiques with the proposal.

To the people that may be critical of the increase, Hailsham said that this is not set in stone and there are opportunities to change the proposal.

Before ASG makes any formal vote, senators and cabinet members are seeking more feedback from the student body.

“A lot of senators are reaching back to their constituents and we’re waiting for more feedback because obviously we want the feedback of the student body before we go about making any change,” Liriano said. “As soon as we get information from constituents, I mean it takes time. The most important thing is the student feedback.”

Alea Reyes,’18, spoke with her ASG senator about the potential increase.

“I think the increase is just a big jump. I would have done it in small increments, over time.”

Haley Marblestone,’16, thinks the increase would be beneficial.

“Its beneficial because we are trying to add so many clubs and in order to add those clubs. we need funding.”