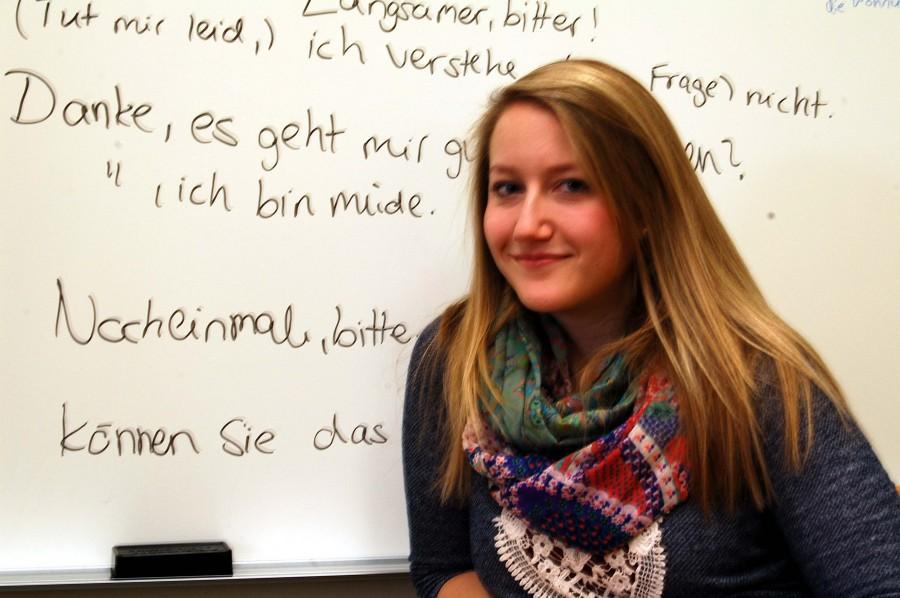 Katharina Schulz came to America from Cologne, Germany for a semester of teaching and studying with the Pennsylvania Colleges in Cologne program.

Since leaving her hometown of Cologne, Germany, Katharina Schulz has found surprising ways that she was unprepared for her year in the U.S. Before coming to the States, she took Latin, the prerequisite at her university for taking English, and has participated in teacher training since her enrollment in Fall of 2011. She also speaks French, and spent seven months abroad in Australia working and travelling.

There were some common English vocabulary words she found she did not know when the time came for her to use them.

Outside of the language barriers that arise when travelling internationally, Schulz encountered other surprises in social interaction, food and weather.

Although she was initially concerned that some Americans may have preconceived notions about Germans, she found she was wrong.

“People are way more open-minded toward Germans than I thought,” Schulz said.

She also was not prepared for the physical distance most people keep from each other. When people are greeting each other in Germany, they hug and kiss. She was caught off-guard when she realized people just meeting only shake hands and even friends only occasionally hug. This aspect as well as the distance from home have been most challenging for her. She sometimes feels it is challenging to connect with students who are not international.

“People kind of keep to themselves a little bit,” she said, adding, “It would be hard to join another group.”

To her excitement, eating healthy has not been as challenging as she feared it might be.

As for the weather, unlike the constant temperature fluctuations in Meadville, Schulz is used to slow seasonal changes and a steady decline in temperature. She also does not get much snow in Germany.

Schulz is not disappointed with the environment she has ended up in, however. She was looking for something different from home when she left. In Germany, she is one of 38,000 students currently enrolled at the University of Cologne. She knew she wanted to go to a small school while abroad, and had no trouble deciding to apply to Allegheny College. She was so sure of her decision that she did not apply anywhere else.

Patrick Hollenback, ’17, who is in Katharina’s history class, is appreciative for the opportunity to learn with an international student.

“We only grew up with the American perspective of history,” Hollenback said. “So it’s been really interesting to have the perspective of a student from another country.”

In her German class, she works with Peter Ensberg, professor of modern and classical languages. Ensberg has found Schulz’s contribution to the class invaluable.

“It is very important–essential–to have a native German,” Ensberg said.

Ensberg is also grateful for having been able to work with Schulz specifically.

“She is very good, very mature,” he said, adding, “She has a lot of enthusiasm.”

Ensberg said her job of organizing events for her house has been made more complicated by the fact that there are now two German houses due to the increase in interest. Students had to apply to land a spot in one of them, partly due to the Pennsylvania Colleges in Cologne program that Schulz is a part of. As students go abroad and return, their interest in becoming well-versed in the German language is usually heightened.

Once she has returned to the University of Cologne, Schulz will complete her final year and graduate.