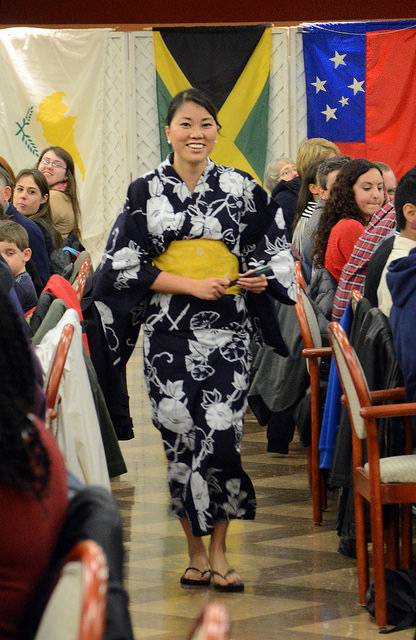 Risa Kondo, ‘18, wore a traditional Japanese yukata, representing one of five countries in the fashion show during the International Dinner on Nov. 23.

On Nov. 23, Allegheny’s International Club hosted its annual International Dinner in Schultz Banquet Hall. The event was attended by international and domestic students, as well as faculty, their families and members of the Meadville community. Tickets for the event sold out by Nov. 19. In total there were 250 people in attendance.

Of these 250 people, 90 were volunteers who either helped prepare the dishes for the dinner, or who participated in the fashion show or performances that provided the entertainment. Most of these volunteers were international students who worked in groups to cook traditional meals from their cultures.

Sixteen dishes represented Vietnam, Greece, Japan, China, Brazil, Germany, Morocco, El Salvador, Sudan, Spain, Philippines and Portugal. The recipes for each dish were provided by students who acted as the head chefs for their dish. Some of the meals required preparation spanning both Saturday and Sunday.

Pedro Araujo, a Brazilian student, helped cook the Coxinhas, a traditional Brazilian deep-fried chicken dish. It took 12 of them more than six hours to prepare the meal, but Araujo said the cooking was as good as the dinner itself.

“The pre-dinner was cool cause we could hang out with our friends and see other recipes,” Araujo said.

Peter Adler, ’16, said he was impressed with the food and the way it was organized to make sure the quantity was done correctly. A professional chef measured out all the food to the right quantities for when the students arrived.

“We told him what we wanted to cook and he told us how to do it,” Adler said.

Shu Yi Tang, ’17, vice president of the club, welcomed everyone at 6pm and gave a brief speech. Guests at each table were then allowed to go up and choose their food before the evening’s entertainment.

The evening began with a fashion show. Students wore traditional clothing from China, Germany, Vietnam, Japan and Morocco. Each representative walked out and presented the clothing while Tang gave the audience background information on what the clothing represents and its significance.

The fashion show was followed by performances by the Aikido club, two singing performances and a combined Chinese bamboo flute piece with a Korean song.

The tables were decorated in papers with the recipes for the dishes printed on them. This was the first year the recipes have been shared for people to take home.

Tang believes that food is a great representation of a country’s culture and the dinner gives people the opportunity to experience this. For the people who cook, they are able to feel proud sharing their culture with people and the community is able to enjoy their dishes.

“Every year we do this dinner before Thanksgiving,” Tang said. “It’s similar to Thanksgiving dinner where everyone is giving back thanks: It’s a way to thank everyone who has been helping International Club in various different ways. At the same time, it’s an opportunity to engage diversity and give people the chance to experience international cultures through food, music and the fashion show.”

Adler said he enjoyed the variety of foods as well as the social aspect.

“It was like a big huge family dinner,” Adler said.