Premiere of “The Office” supplies humor but leaves pages blank 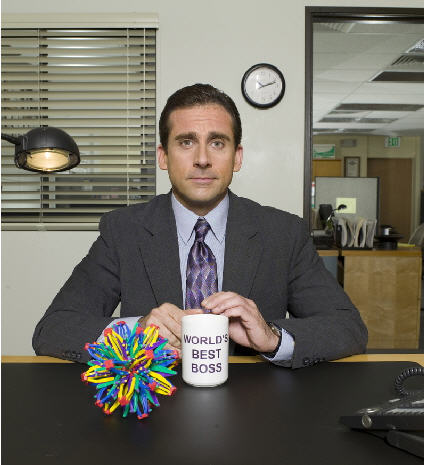 The season opener of 'The Office' reminds viewers that Steve Carell will soon be leaving his role as . images.dvdcollectionsale.com

Belting out a hit from the 1960s, getting trapped in an elevator and spanking a new employee is just another day at “The Office.” The seventh season of the NBC hit premiered Thursday night with the Dunder Mifflin employees still hard at work…and play.

Andy Bernard and the entire cast of “The Office” kicked off their season premiere, entitled “Nepotism,” with a rendition of “Nobody But Me,” a 1968 song from The Human Beinz. I was slightly confused by the random opening segment, but couldn’t help being entertained by their viral music video.

As a late “Office” fan, I only recently caught up with the series, but, it didn’t take long for me to deem it one of my favorite shows. Like other avid watchers, I also felt the sting of the news that Steve Carell would be leaving his role as Michael Scott, the regional manager of Dunder Mifflin’s Scranton branch, after this season. Michael is the center of much of the show’s humor and it will be interesting to see how the office carries on without him, if it can at all. Without his antics, the rest of the cast might end up actually selling paper.

Many “Office” fans have described the recent seasons as underwhelming. I may not have watched the series as intently as others, but as far as I can tell the show is just as entertaining as its first successful seasons. The plots are still amusing, the character confessionals are still witty and Dwight is still Dwight.

Allowing power go to his head, as usual, Dwight embraced his new ownership of the Dunder Mifflin building. Newly-married Jim and Pam, however, a couple whose relationship has been a major plot from the show’s beginning, were not at all intimidated by Dwight’s new power. Jim failed when trying to prank him , but Pam proved she could be as good a mastermind as her husband when she successfully (and hilariously) trapped Dwight in an elevator.

Jim and Pam may still be the office lovebirds, but there were some changes in the office relationships. For instance, there is a new fling between office secretary Erin, and Gabe, the coordinating director of emerging regions from Sabre, the company that took over Dunder Mifflin. This new couple is sure to face problems with Andy, Erin’s old boyfriend, who has already had a hard time hiding his jealousy.

Another of the episode’s funniest moments, came, not surprisingly, from the office’s unprofessional boss. When Michael hired his nephew to work in the office, the young man’s lack of initiative and unforgiveable mistakes frustrated the other employees. Fed up with his nephew’s “I don’t care” attitude, Michael finally took action (in his own unorthodox way) and spanked the newest employee in front of the whole office, causing the young man to storm out, swearing, from the office.

Although there were entertaining moments, I have to admit the cliffhangers from last season were left in midair. I found myself wondering about Holly, the former employee Michael considered his true love, who was separated from him when the company transferred her to another branch. Although his boss mentioned bringing her back to the Scranton office, in this episode at least, there was no sign of her.

“The Office” characters alone have always made this show worth watching and this season is a must, for it’s Michael’s last chance to embarrass himself. As for the unanswered questions at the infamous paper supply company, I guess we’ll have to read between the lines.