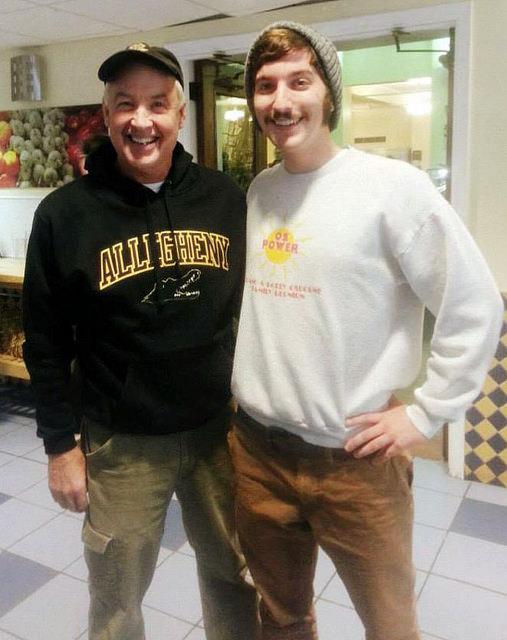 Allegheny alumnus Ben Burtt, ‘71, poses with student Joe Bruch, ‘16 during his visit to campus this month.

Two production classes gathered into the small screening room in the Vukovich Center to listen to Benjamin Pickering Burtt speak on Monday, Nov. 10.

Burtt is a four-time Academy Award winner for his sound editing skills. He graduated from Allegheny in 1970, where he received his undergraduate degree in physics.

“[Burtt]’s talk was immensely important for the introductory production students because it allowed them to witness the creative measures he took during his early filmmaking days with limited means and rudimentary equipment,” said Reilly. “At the same time, it also allowed them to hear how he still considers the very basic components of effective storytelling even though he now has unlimited production resources and technology at his disposal.”

Burtt graduated in 1975 from the University of Southern California School of Cinematic Arts with a master’s degree in film production. He shared with the Allegheny student audience that if his career in production fell through he had planned to become a science teacher. Although his career now does not seem to connect with his degree, he has managed to find ways to create award winning sounds by utilizing his physics undergrad and his masters in film production.

In May 2004, Burtt received an honorary doctorate from Allegheny College at the Commencement ceremony.

While reminiscing about his time at Allegheny he reflected on the summers he spent on campus with his friends creating videos. He said they made airplane films and explained to the audience how they used mirrors to reflect the sky.

“Learning for someone like Ben Burtt was an amazing experience and truly inspiring for all of us as students. Just seeing someone so humble and down to earth talk about his achievements in such a nonchalant way was awesome,” said Seidman.

Some of his most famous work was involved with “Star Wars” where he did the sound editing and created the sound of the lightsaber. “Star Wars” was just one of four films he worked on and he received an Academy Award. The other films he received an Academy Award for includes “E.T.”, “Raiders of the Lost Ark” and “Indiana Jones and the Last Crusade”. His most recent work comes from the Disney movie “WALL-E”, where he worked as the sound editor.
“The hardest thing for me to do is exotic voices,” Burtt said. “It’s hard to create that illusion.”

While he spoke to the classes he talked about some of the challenges he faced and also gave students a chance to ask their own questions.

“The talk was really inspiring. He talked a lot about taking advantage of opportunities and what a privilege it is to be able to do what you love,” said Seidman. “He also spoke on how much time it takes to perfect the sound of the movies he’s involved with and how into it he gets. After the talk, I think everyone in that room came out feeling excited and inspired about making films.”