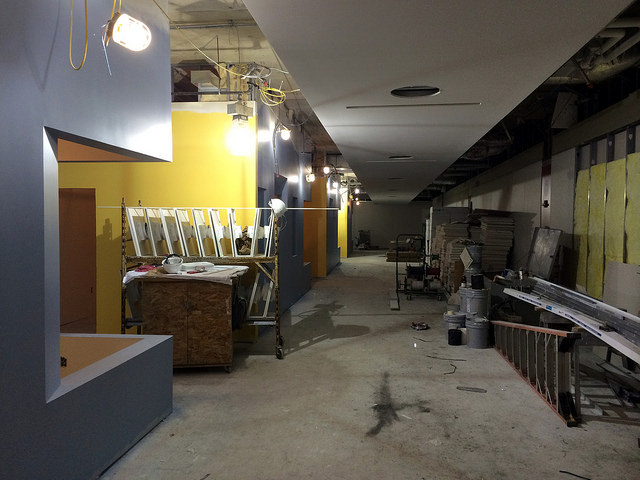 Construction behind the temporary walls is progessing as the semester comes to an end. The majority of work remaining includes painting walls and adding ceiling tiles.

The Pelletier Library has been under construction since May 2014 to renovate the building in order to accommodate the Gateway that will be moving offices in January. Offices including career education, center for political participation and various other offices are expected to begin moving into Pelletier on Jan. 6. According to Brian Gillette, assistant director of Physical Plant, the college expects to meet that deadline.

“We are still on schedule to be in there on Jan. 6, so when students come back from break, the temporary walls will be gone,” said Gillette.

The cost of renovating the library to include more than 35 offices on the main floor and other renovations throughout the building came in at around $1.2 million according to Gillette.

The Gateway is designed to house one central location for multiple student advisory services. The intention is to create a one-stop center for student, education and career services and Pelletier was agreed to be the best space to reach students.

Gillette explained that construction on the Gateway began following commencement in May 2014, with the intention of limiting the disruption of the library’s operations.

“Over the summer months we completed parts of the projects so we could restore the functions of the library,” said Gillette.

Bills is confident the renovations will prove effective for student learning, as she mentioned there was an initial concern about losing student space with the renovations. In a previous interview towards the beginning of the semester, Bills explained the goals of renovation.

“It was our chief requirement of the architect that we not lose any student space,” said Bills. “I think it’s going to be a shock at first and I think people are going to think perhaps they are losing some space. But actually, in terms of total footprint, we have just as much student space as we had before.”

However, with the ongoing construction and temporary walls throughout this semester, Bills admitted that there has been a drop in student attendance this fall.

“The main problem during this fall is it has been a little crowded and a little noisy but otherwise, we have been able to operate pretty well,” Bills said.

Bills was not the only library staff member who stated that the library operations were not largely affected by the construction.

“I think there is a lot less student space but it’s quiet at night so it’s not too bad,” said Bryn Philibert, ’16, circulation desk monitor.

The Gateway has been a long time coming and preparation has been underway for years, the last obstacle standing in its completion was space.

“We have been working on this for two years now,” said Bills, “the first step was reducing the space used by the library.”

Reducing space meant throwing away large parts of the library’s collections. The library has gotten rid of various written material but students are not losing resources, they are merely being directed to the online version of that document. Bills made it clear that the journals that were thrown away were only ones available in a digital format.

Despite the minor interruptions and inconveniences, both Bills and Gillette praised the organization and cooperation among all the departments involved during the project, noting that no services were cut in the library during the constriction.

“The staffs involved in the Gateway have been key to its success,” said Gillette.

Gillette said that the majority of the remaining construction includes painting and minor installations. He described the floor plan, saying that the idea is to have a long open “main street” with various offices and avenues branching from the “street.”

The floor plan also has about five group study spaces that can serve as student study space after Gateway operating hours.

Gillette and Bills both explained that the final hurdle of the Gateway renovation will be moving the different departments into the offices. The Jan. 6 move-in date can potentially make the process more difficult, all depending on the complication of snow.

The Gateway is expected to be open and operational during the first week of classes following winter break.