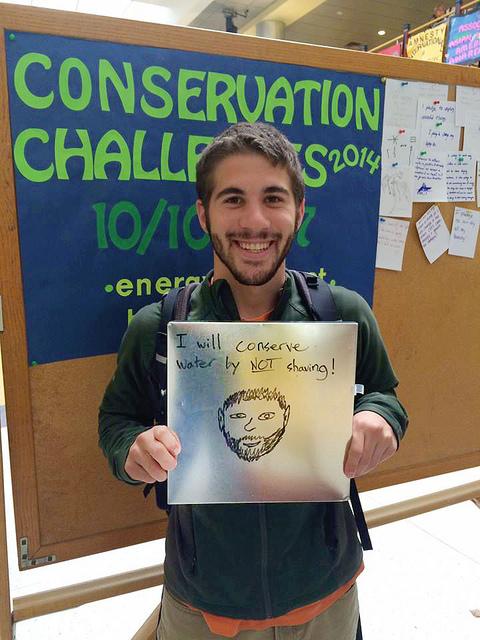 The Green Gator at Allegheny Campus

Owen Ludwig, ’18, has decided to conserve water by not shaving through the month of October. Kelly Boulton, the sustainability coordinator at Allegheny College, organized the photographing of students and their plans to conserve energy throughout the challenge.

Allegheny College has dedicated October as a month for energy conservation. Though each dorm building and fraternity house was tasked with cutting back their energy usage as much as possible, the dorm building Allegheny Hall has experienced a 21 percent increase in energy consumption. The lowest decrease after Allegheny Hall was a three percent decrease in Brooks, which demonstrates a large difference. Although some residents in Allegheny Hall are baffled by the increase, others are less surprised.

Emily Graves:Emily Graves, ’16, is one of the students who is less than surprised about the increase in her residence building.

Although she finds it counterproductive to only try to conserve energy one month of the year and then return to being wasteful, she has a variety of habits that she continues all year long to be more sustainable. She turns down the heat in her room and in the building when it is not cold, she uses the public refrigerator instead of a personal one and turns off her own and the building’s lights when they are not being used.

Taking it one step further, Graves turns off the shower water when she is not actively rinsing herself. In stark contrast, she finds some of the other residents to be far less environmentally conscious.

“On a daily basis I see dozens of cans and other recyclables in the trash when a recycling bin is located right next to the trash,” Graves explained. “Every single light on the building is always on until I, or maybe the one or two other people who care enough, turn them off. Only a handful of people utilize the public fridge, indicating they are using their own refrigerators.”

As to the increase in energy on her part, she believes it only could have increased through warmer water in showers because of colder temperatures outside and using more necessary lighting due to shorter days.

Carly Whisner:Whisner, ’16, did not begin the month with the goal to decrease her usage because she had not remembered that the challenge was going on.

“More notice of it before it began would have helped or posting last years results on the door to try to beat them would be a great reminder,” Whisner said.

She thinks that it is possible the energy increase came from the amount of video games played in her hall, the frequency of the lights being left on, or the amount of television that is watched on a regular basis. However, she does not feel these actions are not out of the norm.

“I was surprised because while my hall mates have a lot of things using energy, it is normal on a day-to-day, month-to-month basis and it does not seem like anything should have constituted such a great change,” Whisner explained.

However, Whisner plans to continue unplugging electronics that she isn’t using and making sure that lights that are not completely necessary are turned off. She does believe that those on her hall have reconsidered their environmental awareness since hearing news of the drastic increase.

“Overall, the hall on the first floor seems to be doing better as the bathroom light and hall light have not been left on, and have recently been off most of the time,” she said.

Angela Schnatter:Schnatter, ’16, is the residence assistant in Allegheny Hall and is surprised about the increase because she knew of several residents who were taking the challenge very seriously. She herself unplugged her powerstrips when she was not using them and moved her food into the community refrigerator so that her mini-fridge was no longer using extra energy. Like Graves, her only thought on how her energy usage could have increased is that she had the lights on earlier than usual as the days have grown darker.

Having given the increase some thought, Schnatter guessed that the amount the lights were left on had something to do with it.

“We went from having the hall/stair lights on sporadically to having them on almost all the time,” Schnatter explained. “I’m sure a lot of other buildings had lights on earlier as well, but we don’t have timer controlled lights like a lot of other dorms do, so if no one gets out of bed to turn them off once someone else has turned them on, they stay on all night.”

Even now that the challenge is over, Schnatter does not plan on going back to her old habits. She has resolved to continue unplugging her chargers and powerstrips when they are not being used and pay closer attention to the hall lights before she goes to bed to try and keep them from being on all night.

Henry Ditzel:Though he was not aware of the October Energy Challenge for the entirety of the month, Ditzel, ’17, was aware partway through that the challenge was occurring. Like several of his hallmates, Ditzel was shocked at how much their energy usage increased.

“I’m not surprised that we had an increase, but the significance of it was not what I expected,” he said.

One thing Ditzel said that he also tried to unplug unnecessary electronics and turn off lights, but that he also attempted to make sure their constantly dripping sink was entirely shut off.

He believes that the increase is in part due to the low amount of residents in Allegheny Hall, which holds only sixteen students. Although some students may have been attempting to lower their energy usage, Ditzel thinks it would have taken longer than a month for them to make a dent since they would be competing with those not making an effort. Along with several students turning on their heat as the weather got colder, Ditzel admits that some residents were likely not as aware of the lights being left on as they could have been.

However, he does plan to continue being more aware since he has seen this increase.

“I will continue to turn off lights, sinks, showers and other energy consuming things to save energy in hopes that we can decrease our ridiculous energy usage,” Ditzel said.

Daniel Litwin:Daniel Litwin, ’17, was caught off guard when he heard about the 21 percent increase in energy usage. Throughout the month of October, Litwin had attempted to take shorter showers.

As to why the energy increase could have happened so drastically, Litwin blames it on the colder weather.

“The only thing I can think of is turning on the heat in the building,” Litwin said.

He said he was surprised to see them in last on the energy conservation list.

“I am surprised,” Litwin commented. “I thought we would decrease or at the very least stay the same.