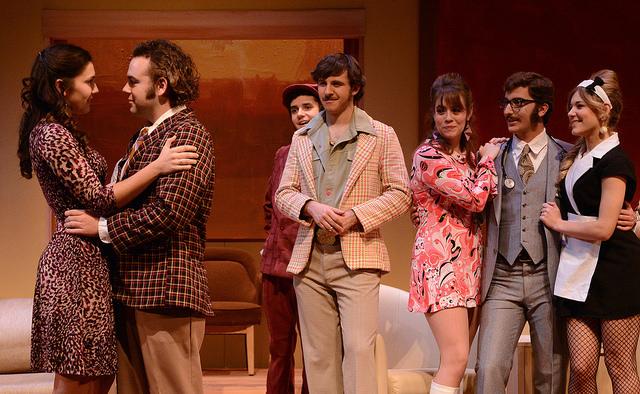 Allegheny College College Playshop Theatre opens their fall 2014-2015 season with “A Flea in Her Ear,” directed by Mark Cosdon. The play is a new version of Georges Feydeau’s Farce by David Ives and is set in in early 1970s Paris.

Allegheny’s Playshop Theatre gave the opening performance of their fall production of  “A Flea in Her Ear.”

This year’s play was chosen and directed by Mark Cosdon of the communication arts department.  Cosdon said this play is considered to be one of the greatest farces ever written for the stage.

“Georges Feydeau’s ‘A Flea in Her Ear’ is enormously influential.  It influences everything from ‘I Love Lucy’ to ‘Gilligan’s Island’ to ‘Ferris Bueller’s Day Off.’  It’s that important and that fun of a show,” Cosdon said.

The entirety of the play is based on a group of friends and follows them as they all seem to be cheating on one another.  The primary married couple, Raymond and Victor Chandebise, have the biggest issues.  The wife is convinced her husband is having an affair so she, along with her best friend, devise a plan to catch her husband cheating.  She leads him to the Frisky Puss Hotel by sending him a letter from a fake mistress and they are accompanied by all of the other characters in the show. It is here that all kinds of misidentifications occur between the characters.

Cosdon has made some changes to the original written play making it even more appealing to the Allegheny community.  In his adaptation to the  production, the setting takes place in the early ’70s while the original play took place at the turn of the 20th century.  Cosdon said he decided to change the setting because the ’70s was a time of changing morals surrounding sexuality.  The revolutions of the ’60s brought about very significant changes in sexual freedoms, particularly for women Codson said.

“It made sense to push it into this setting,” Cosdon said. “We are definitely trying to suggest that these are women who are both of their time but are even beginning to have more sexual invigoration.  The costumes are also really fantastic.  There are a lot of surprises.”

Cosdon said the costumes include everything from bell bottoms to short skirts to go go boots, and he thinks that it makes the play even more entertaining.

The play, which was cast in the first week of September, has a total of 14 students on stage.

Liz Colarte, ’17, plays Raymonde Chandebise, one of the most prominent characters in the play, the wife to Victor Chandebise.  She said her favorite part of working on this production has been getting to know her peers and bonding as a cast.

“We have an amazing cast, we’ve been really lucky,” Colarte said. “Everyone is really talented and really dedicated to the show and I think that’s what is going to make it a great production.”

Colarte also noted that having a large cast was also challenging.

“It’s a lot of fun working with a lot of people but it also took a while to get a good energy.  It was hard at first because there were so many people on stage…But I think now we work really well as an ensemble,” Colarte said.

Joe Bruch, ’17, plays Doctor Finache who is responsible for the generating interest in the Frisky Puss Hotel, agreed with Colarte in that the cast makes the production unique.

“There’s not one person that came in and said ‘oh I’m going to do my own thing.’  Everyone really builds their character off of one another and off of the other characters,” Bruch said.

The obstacles of the play remain different for every student.  AJ Long, ’15, plays Colarte’s husband, Victor Chandebise, and switches to another character, Poche the bellboy throughout the play. Long said the hardest part of the production for him is figuring out the costume changes and making sure his timing seamless.

“In the beginning I would always come on as the wrong character or come in too late or too early.  But now I am starting to get the changes down really quickly which makes things easier,” Long said.

Colarte said for her the biggest challenge was learning how to adjust to having so many people in stage and just getting a feel for how everyone would play their character.

Playshop productions for Allegheny students are free but they are highly encouraged to reserve tickets online prior to performances on the Allegheny website. The play will run from  Nov. 13-15 at 8:00 p.m. and on Sunday Nov. 16 at 2:30 p.m. at the Gladys Mullenix Black Theatre in the Vukovich Center for Communication Arts.