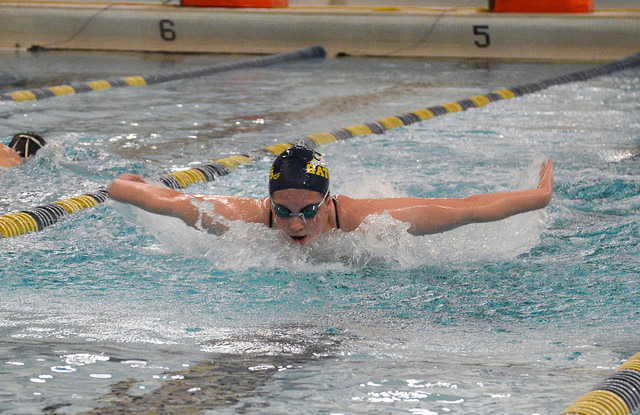 Megan Feeney, ‘17, was chosen as NCAC Swimmer of the Week for her performance at the Penn State Behrend meet on Saturday, Nov. 1.

The women’s swimming and diving team has started their 2014-2015 season with a win against Penn State Behrend. The women swam were able to beat Penn State 193-92.

“We were confident going into the meet and we weren’t nervous so we swam faster,” Alison Herlitzka, ’16, said.

“It’s an honor, it is great to represent Allegheny and the team in our conference,” Feeney said.

The NCAC Swimmer of the week is determined by the conference.

According to coach Kirk Kumbier, the conference looks at all the meets from the weekend, the overall results and individual performances are compared and two swimmers are chosen.

“We try to get Feeney in events that allow her to compete and move to championships,” Kumbier said. “Sometimes the team swims their usual events, but I look at what the other team has and put them in events where they will do well with competition.”

Feeney said she tries to move through the season focusing on one practice at a time.

“The week leading up to the meet, I try to focus on small details to improve,” Feeney said. “Then the day of meets, I focus on getting into the right mental state with a positive attitude.”

Even with the pressure to place high and drop time off of each race, the team finds the good in every meet.

“A successful meet is not based off times or scoring, it’s more about if we could support each other,” Feeney said.

Herlitzka said she feels the team had a successful meet when they know everyone swam their hardest and the team is not looking back at their swims and wishing they had done something different.

This season the team is looking to put up good swims against their competition and place higher at championships at the end of the season.

“I look forward to the surprises,” Kumbier said. “The passion and enjoyment the swimmers have at the end of a race, the emotion is rewarding.”

Being a student athlete comes with challenges but Feeney and Herlitzka have found ways to overcome those.

“Managing my time between swim practice, school work, and having a social life is my biggest challenge,” Feeney said. “I’m also tired all the time.”

Kumbier said the team as a whole faces the challenge of having lower numbers, but works hard and is a good core group.

“The team is always up for each other in the classroom, the pool, and the social arena,” Kumbier said. “Swimming is a mental and physical sport and they are all one team through the year.”

Last weekend, the women’s team lost to Westminster 128-168 at the first home meet of the season.

The Gators will swim at home on Friday, Nov. 14, then travel to Pittsburgh for the Carnegie Mellon Double Dual meet on Saturday, Nov. 15.