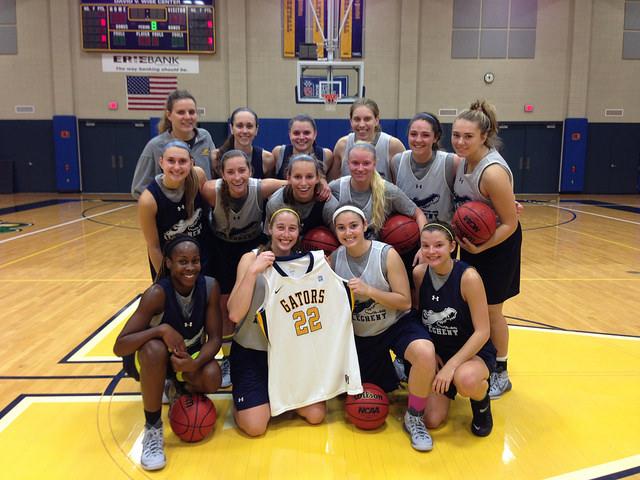 The Allegheny women’s basketball sent a #22 jersey to Lauren Hill to be auctioned for donation to cancer research. The Gator jersey was sold for $250.

The Allegheny women’s basketball team has shown their support for a fellow college student and basketball player.

Lauren Hill, a freshman student at Mount St. Joseph Univeristy, was diagnosed with an inoperable brain tumor and is expected to only live until December. Hill joined the women’s basketball team at Mount St. Joseph at the beginning of her senior year of high school, and was then diagnosed a month later. Originally given two years to live, her prognosis has been altered to just a few more months.

Since her diagnosis, Hill has been determined to continue playing the sport she loves. When she went to college, she had one goal of playing in at least one college basketball game.

Mount St. Joseph’s season typically starts at the end of November, but the team’s first game against Hiram University was moved up to Nov. 2. The game was held at the Cintas Center in Cincinnati, Ohio. Within thirty minutes of tickets for the game going on sale, the arena sold out.

As Hill’s story spread across the country, players and athletic departments began showing their support for Hill by using the hashtags #1more4Lauren and #Layup4Lauren on social media.

“I first heard from one of our alums, Kendra Pilarski,” coach Kate Costanzo said. “Kendra sent me the link to the initial article that was released about Lauren and hours later her story was everywhere.”

After Costanzo found out, she had a meeting with her team to share Hill’s story and think about how the team could support her.

“My first reaction was wow, seeing someone so young dealing with this,” Costanzo said. “Her story has turned into a huge national inspirational story and we are doing our part media wise.”

Mount St. Joseph started an intiative to have schools across the country send number twenty-two jerseys to Hill, who signed them and are now being auctioned off.

“We donated our number twenty two jersey, along with teams from all over, and after Lauren signs them they are being auctioned off,” Iffie Uwazie, ’16, said.

The Allegheny jersey that was sent in has been auctioned off already, and was sold for $250 to a friend of the program, according to Costanzo.

“Lauren’s story has opened our eyes,” Kendall Hoffman, ’15, said. “I have taken away that you can’t take anything for granted and we should live with no regrets.”

The team has had many conversations about Hill and her determination to play even when she is so weak.

“It changes perspective to see someone so committed to something larger than herself,” Costanzo said. “We are thinking about her and can’t imagine that happening to our team.”

Hoffman said seeing the strength Hill has had through everything has impacted the team.

“She could barely walk and she still went to practice and stepped out on that floor to play her first, and possibly only, game and she scored,” Hoffman said.
Uwazie said watching how happy Hill’s team was for her when she scored and how happy she was when she was playing brought back the strong, family like bond the team has.

“We are living in this season, playing for right now with who is here now and taking every game as it is,” Hoffman said.

Marina Scarantino, ’15, said the team has realized how quickly things can change and they were eager to help her.

“This story was one we could really relate to ourselves and so it has that much more of an impact,” Scarantino said. “This season whenever there are injuries or doubts about our play, even slightly bringing up Lauren’s story and remembering what she fought for will change everything.”

Costanzo feels that Hill’s story has impacted the team and has messages that the team should remember.

“Lauren is concerned with the people she is leaving behind and is dedicated to awareness of the cancer fund,” Costanzo said. “I want the team to tell their family and friends they love them and have an attitude of gratitude, being thankful for the talents they have.”

The team will open their season with the Greg Richards ‘08 Memorial Tip Off Tournament on Saturday Nov. 15- Sunday Nov. 16 at 4 p.m.