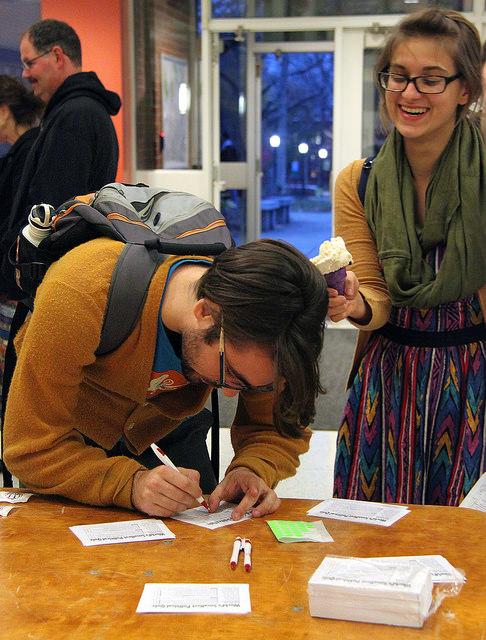 Julie Copenhaver, ‘16, holds an ice cream cone for Craig Dinwoodie, ‘16, while he fills out a quiz during an ice cream social hosted by the College Republicans during election evening on Nov. 4.

Allegheny student organizations provided multiple services on campus to help students find their way to the polls on Wednesday, Nov. 5. The midterm election was an opportunity for big change in the U.S. House and Senate and the Center for Political Participation and Allegheny College Republicans worked to raise awareness for the election.

The CPP fellows provided rides to shuttle students to the polls on election day, once at 9:30 a.m. and again at 1:30 p.m. The fellows also tabled outside of Brooks in the week leading up to the election, informing students on where they needed to vote and providing information on the platforms of the candidates.
“They were helping people with absentee ballot questions, registering to vote and driving locally registered people to the polls,” said CPP fellow, Aurley Morris, ’15. Morris has been a fellow for the CPP for three years.

The CPP encourages students to engage in their political system regardless of their political opinions. Throughout the year, the fellows also makes themselves available to help students register to vote and has brought in several speakers for The Year of Voting Rights.

“As a fellow, it’s your job to mandate political participation at Allegheny College and I would be shirking on my duties if I was not doing everything in my power to get people to the polls,” said Zach Cramer, ’15, a CPP fellow.

Allegheny’s College Republicans also held an event for the election, where they offered ice cream and a quiz to help students figure out how they should vote. The quiz asked questions on personal and economic issues.

“We wanted to let people figure out where they would stand. And we also wanted to encourage people to vote or even look into candidates, or just be more politically aware in general,” said Allison Zegar, ’16, who was at the College Republican event.

Nick Tortorici, ’15, is chairman of College Republicans and wanted the event to inform students about the election and candidates.
“On election day, we try to take as non-partisan of a take on elections as we can because we’re here just to get people informed and excited about elections because at this point its too late to make anyones mind,” Tortorici said.

The Campus polled 50 students on their voting and found that 23 students voted and 27 did not.

Tortorici observed that political groups on campus do a lot to raise awareness but he wishes they could do more to get students to the polls.

“In general theres not enough information on how to become an active participant in the voting process and really that could be lead by a number of organizations and we shouldn’t be the only ones doing it. It’s a huge burden for us [political groups on campus], we have limited resources and limited time and its hard. People don’t realize that their vote actually does matter and the best kind of voter is an informed voter.”