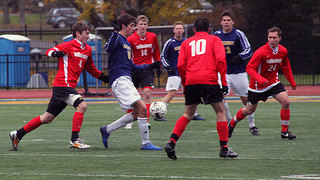 Izaak Miller, ’18, passes the ball down the field during the game against Wittenberg University. The Gators lost 2-1 in the final game of the season.

On Oct. 21, the men’s soccer team beat The College of Wooster 5-1 earning Coach Angelo Panzetta the honor of winningest coach in program history, then continued the winning streak on Oct. 25, beating DePauw University 1-0 for the first time in program history.

“We didn’t know that the game would make him the winningest coach and he didn’t either,” Stefano Wach, ’15, said. “After the game, Coach Panzetta was talking to the coach from Wabash about results and found out then.”

Daniel Szekely, ’15, said not knowing but finding out after the game made the victory that much more satisfying.
Panzetta said he is proud of the honor.

“It feels great,” Panzetta said. “A lot of people had a hand in it over the years and appreciate the groups I have had here.”

Wach, Cameron Olson, ’15, and Nick Dias, ’17, scored a total of five goals for the Gators against the Scots. The Wooster game was the first time since the 2011 season the team has scored five goals in one game.

“It was a hard fought game,” Wach said. “DePauw came into our conference three years ago and dominated, but we finally knocked them off.”

Panzetta said DePauw is new to the league but is a very good team in the conference.

“Since I started playing here they have always been a great team and it has been a competitive game,” Szekely said. “It always feels great to beat a well respected team at their home field, especially after they knocked us out of the playoffs two years ago by beating us in our final conference match.”

Wach said the team’s sense of fight and staying focused on the game lead to having a successful game.

“The team had good training leading up the game and with the added focus and positive attitude were able to win,” Panzetta said.

In the 67th minute Wach scored the game winning goal for the Gators.

Panzetta said DePauw is one of the farthest trips the team makes, so the win made the ride home a little shorter.

“This season was special for us,” Wach said. “We laughed at the fact that nobody knew what was coming up for Coach Panzetta and we had a little ceremony where we gave him cake and sang in the locker room.”

Even with the good ending to the season the team had, there were challenges throughout the season as well.

“Our biggest challenge was ourselves, our own expectations got in the way,” Wach said. “Between what we accomplished in practice and showed in games, we were our own worst enemy.”

Panzetta said a team challenge was consistency through games.

“There were games where we played at a high level and games with a drop off, we needed to maintain level in games,” Panzetta said.

Szekely said the team played a lot of nationally ranked teams from the conference and fought hard in a lot of close matches.

“Sometimes the games did not go our way but we made sure to end the season on a relatively good note with our last few games,” Szekely said.

The team has ended their 2014 season, but practice never ends for the team.

“We will work as a whole on being more dangerous in the final third, scoring goals, the finishing technique, and we are always working on defending,” Panzetta said.

For the seniors, their collegiate soccer careers have come to an end.

“It feels weird being done, although it still has not hit me yet,” Szekely said. “I’m going to really miss playing and competing at the collegiate level but soccer will always be an important part of my life as will the friendships I’ve made here throughout my time playing.”

Wach said he also feels like the end hasn’t come yet.