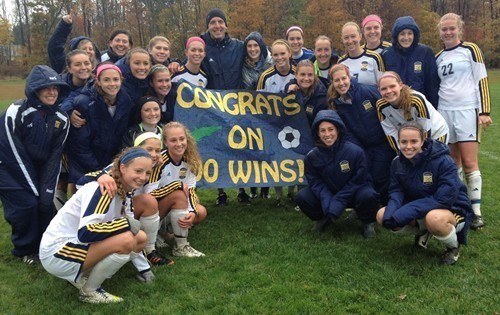 The Allegheny women’s soccer team took the field Homecoming weekend in the rain not only fighting for another conference win but to capture head coach Michael Webber’s 100th victory.

This year marks Webber’s 10th season with the blue and gold as head coach. He is the second coach in women’s soccer history at Allegheny to reach this accomplishment. As a head coach, Webber has experienced a lot of success at Allegheny. Last season Webber coached the Gators to the first NCAC title in program history and was awarded the NCAC Coach of the Year honor.

“Being a team sport, the wins cannot be solely attributed to the head coach,” Coach Webber said. “I have been extremely fortunate to be involved with exceptional players and assistant coaches who have had a greater impact on our success.

The team had a strong start to the game against OWU. Early in the first half sophomore Liana Leja, ’17, catapulted the offense with two goals against OWU. In the second half, Lauren Miller, ’16, and Olivia Cushman, ’16, scored for the blue and gold giving the gators an extra cushion towards the win. Jessie Thiessen, ’17, had three assists during the game helping cater to the gators win; enabling her to achieve NCAC Player of the Week honors.

“Not all of the players were aware his 100th win was up in the air that game and it made it that much better knowing we beat OWU at home for his honor,” Miller said.

Thiessen said some of the players knew and found out about it from the athletic department.

“It was a really cool thing to be part of. He definitely deserves the recognition,” Thiessen said. “He has done so much for the program and has been the reason for so much success over the years. I am so honored to have played for him and to especially be in the game that got him to 100 wins.”

The women’s soccer program has been successful under the coaching of Webber.

“I’ve never been a part of history until I played for Allegheny,” Miller said. “We just won the first NCAC title for women’s soccer with him last season and now he just reached 100 wins. I’m glad I’m here to see him get to this accomplishment and have the accolades he has had.”

Webber played Division I soccer at the College of Holy Cross where he still holds leading records for saves percentages and career saves. Before coming to Allegheny, he was the head women’s coach at Worcester State University from 2001-04, while there he coached the Lancers to three conference tournament appearances.

“He pushes us to play our best in practice,” Thiessen said. “He will often have us do drills that involve a lot of thinking so that when we get to the games we do not have to think so much and we can just play. He really prepares us for our competition by making sure we work on our weak spots and continue to improve each and every day. He also prepares us for conference play by giving us such tough competition during the non-conference games. He is an amazing coach on and off the field. He does not only teach us about soccer but he teaches us life lessons as well.”

The Gators were voted by the coaches to finish first in the conference this preseason amd currently stand atop the NCAC tied with Kenyon at 15 points. A finish in the top two spots will allow Allegheny women’s soccer to host a semi-final match here at Robertson Athletic Complex for the second consecutive year.