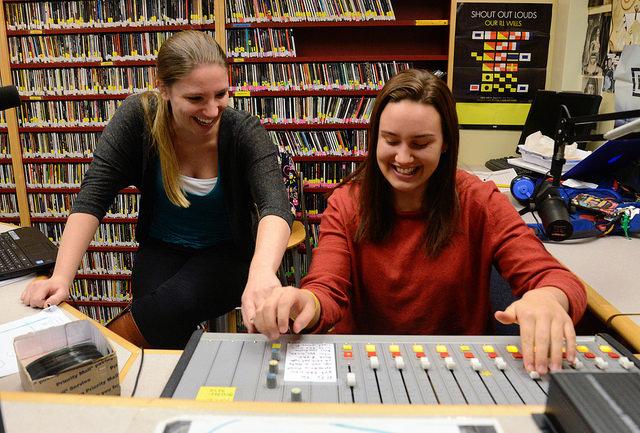 Kristen Migliozzi, ’17, and Jackie Verrecchia, ’17, manage the control board for their radio show. Verrecchia described their show as a time for them to play any music they feel.

The station went live on Oct. 3, to coincide with College Radio Day. The launch is the end result of a project that has been on the station’s radar for a few years.

“It has been the goal for the last few years but there were some complications that delayed it until now,” said Steve Milcarek, ’15, general manager of WARC.

Milcarek explained that the easiest way to listen to the station’s live stream broadcasts is to visit the station’s Facebook page and follow the link posted.

There are several steps to being able to live stream a broadcast explained Willem Yarbrough, ’15, WARC’s technical director.

In a normal broadcast the signal is generated on site and transmitted through radio waves. The new live streaming, instead of converting sound waves into radio waves, runs the waves through a digital audio encoder, encoding the signal into the digital format required for live streaming.

Once the signal is encoded it must be hosted by a server. This step is completed off-campus and the signal is run through an outside server company called Make a Voice. The server hosts the live streaming, allowing the station to broadcast online as well as through the air.

Milcarek explained that some legal and technical issues needed to be worked out before the live streaming could be launched.

The radio station came close to having live streaming up and running at the end of last year, after a senior on the radio station’s board, Lillian Gooden, ’14, managed to work out some of the legal issues including the purchasing of rights to stream online.

“At the end of the year we were installing it but there were some issues,” said Milcarek.

The cost of implementing the new live stream was moderate but includes some continuing costs following the initial setup that may increase after this year.

Milcarek said that the price of the web hosting has been reduced to around $50 a month for at least this year but he fully expects the price to go back up. Despite the uncertainty in costs for upcoming years, Milcarek has faith that the station will make it work.

“We would just have to cut back on other things,” said Milcarek.

The ability to live stream gives the radio station a much wider audience than ever before.

“It means more people can listen, especially students who don’t tend to have radios,” said Milcarek.

In addition, the installation allows disc jockeys at the station to broadcast outside of the Allegheny community, giving family members the opportunity to listen to radio shows.

“I think it is really convenient for my friends and family back home,” said Jeremy Shaban, ’18, who hosts his own radio show on WARC.

Beyond friends and family being able to listen, Shaban expressed his excitement that the station could now be heard by students on other college campuses, not just Allegheny.

Milcarek admitted that allowing the DJs to share their show with their family was one reason for the addition of live streaming. He also expressed his hope that the promise of a larger audience will rekindle interest in the station, which he explained has decreased in recent years.

“It might re-energize people toward the station,” said Milcarek.

The number of listeners has been fairly modest so far, but Milcarek emphasized that the numbers are increasing.

The launch was not without its glitches. Initially, there was a problem with the strength of the signal which would cause frequent pauses while the broadcast buffered, explained Yarbrough.

“At first we had a lot of interruptions in our signal,” said Yarbrough. “It simply wasn’t streaming fast enough…It just took a little bit of trouble-shooting.”

The problems were corrected within the first week and Yarbrough stated that the streaming has been working well since.