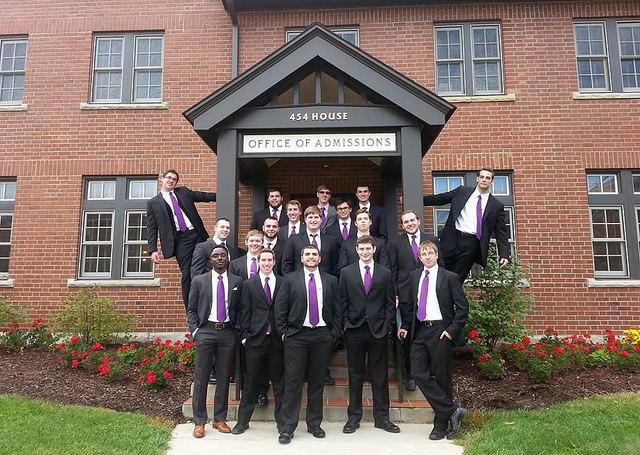 Some of the founding fathers of FIJI’s recolonization celebrate after receiving the chapter’s charter. The 454 House/Office of Admissions used to be the fraternity’s house.

The weekend of Oct. 4, saw the return of one of Allegheny’s oldest fraternities, Phi Gamma Delta, Pi chapter. Commonly known as FIJI, the fraternity made its return to campus as a fully chartered chapter, following the loss of its original charter in July 1998.

FIJI recolonized in 2012 when the Board of Trustees and the Interfraternity Council voted to re-establish the fraternity. This began the process for the Pi colony to work towards regaining its official charter.

“Recolonization is usually a two to three year period where a chapter, whether they are new to the campus or returning to the campus, goes through a period of being involved and participating in chapter duties.”

Webster explained that the period is similar to tryouts. It gives the organization a chance to prove itself and become part of the Allegheny community. During this two year period, in the case of fraternities, the chapter can petition the grand chapter to become fully chartered.

Webster attributes FIJI’s perseverance and effort as largely responsible for the fraternity receiving its charter from the grand chapter this year.

“Straight off the bat, they were very active in the community and building a lot of respect as a chapter with the Allegheny community as a whole,” said Webster.

Gretchen Symons, director of student involvement and advisor to IFC, also commended the fraternity on its efforts to be chartered by the grand chapter and its determination through the process of gaining its charter.

“This has been a conversation that has been going on for a while,” said Symons.

Symons explained that her role within IFC is to act as a type of liaison between the college and the fraternities and sororities on campus. Symons usually holds weekly meetings with the president of each fraternity and sorority.

In the case of FIJI, her general responsibilities increased. She also noted that the requirements that any fraternity or sorority must meet to receive a charter are thorough and include good academic and community standing.

“They have a number of checkpoints they have to meet, both with the College and the national headquarters,” explained Symons.

Though the decision to charter a fraternity is left largely to the grand chapter of that fraternity, the decision to allow recolonization is entirely up to the college’s Board of Trustees. However, IFC votes on the matter and submits a recommendation to the board that carries a fair amount of weight on the decision.

Each IFC member’s vote is supposed to be their own, but in a “Campus” article dated April 22, 2011, several sources within IFC admitted to feeling pressured by their national organization to vote in favor of allowing FIJI to recolonize. At the time, the five fraternities within IFC belonged to the North-American Interfraternity Conference. NIC holds to policies promoting the expansion of Greek life on campuses. Cory Muscara, ’12, Phi Kappa Psi alumni, raised the point that each member of IFC had been contacted by their national organization to remind them to adhere to NIC’s policies and vote in favor of FIJI’s return.

Symons, who was on staff at the time of the vote, and who is quoted in the article, denied having knowledge of these claims at the time but did state that NIC tries to foster an environment where existing fraternity and sorority members are open minded to expansion.

The reason behind the loss of FIJI’s original charter is unclear. Statements given by both Symons and Dean of Students Joseph DiChristina in 2011 indicate that alcohol was part of the problem.

Symons stated that the reasons behind the loss of the original charter were due to behavior that was unbecoming of a fraternity.

“The national organization and the college decided that they needed to take a break,” stated Symons.

Years following the charter removal, FIJI expressed a desire to rejoin the Allegheny community and prove itself to its national organization. FIJI president Chad Brinkman, ’15, expressed his feelings about the successful chartering of FIJI.

“It is awesome. It is so cool, especially being in it for two years and seeing the progress from that first semester to now, I’m so proud that I was a part of it,” said Brinkman

“That’s behind us, it’s in our past. Yeah, it was a serious speed bump but it happened, and we are moving forward and learning from it,” explained Brinkman.

Moving into the future, Brinkman expressed his hope for the chapter, explaining their desire to continue to improve.

“Our ultimate goal would be to win the Cheney Cup, which is the national fraternity’s chapter of the year award. You have to be excellent in everything you do in order to win. We’re just trying to improve,” he said.