Armenta Hinton was hired this year as the new associate dean of the college and director of the Center for Intercultural Advancement and Student Success (CIASS).

The college decided to hire outside, as opposed to filling the position from within the college, and conducted a national search for the best possible candidate. A similar search was conducted last year to fill the vacant position of associate provost for diversity and organizational development. Hinton was initially a finalist for this position, said Terrence Bensel, associate provost and director of the Gateway.

However a year later, with the college looking for a new associate dean and director of CIASS, Hinton’s name resurfaced.

“She really brought a lot of student support experience to the position,” said Bensel

Bensel explained that the position Hinton originally applied for dealt more with the administration of the college than with the actually student body. But as associate dean, Hinton will be more focused on student involvement, putting her student support experience in action. The college felt that she was a good fit as associate dean because it requires skills in reaching out to students, according to Bensel.

“For Dr. Hinton it was important to meet the students,” said valerie guerrero, associate director for CIASS.

Guerrero explained that whenever new staff gets involved it allows for a fresh set of eyes to look at how things are being implemented.

“I think there is always an excitement when you a new set of eyes get to look at things on campus,” said guerrero.

She admitted that Hinton’s dual role as associate dean and director of CIASS keeps her extremely busy with numerous meetings requiring her attention, but stated that Hinton is managing very well.

“The first 90 days for any new hire is a lot of meetings,” explained guerrero.

Hinton’s approachability and desire to meet and interact with students were both praised by guerrero.

Originally from Montgomery, Ala., Hinton received her Bachelor’s of Fine Arts in music history and piano from Alabama State University. She also studied at Roosevelt University in the music department and received her Ph.D. from Antioch University in leadership.

Hinton has spent 15 years overseas where she worked as an administrator, teacher and performer. Her employers abroad included the Birmingham Royal Ballet and the Birmingham Opera Company.

“I have always wanted to link arts, communications and business,” said Hinton

In addition to her experiences overseas, Hinton is the co-editor of a collection of essays on diversity called “Persistence and Memory.” She has also done extensive research in the area of equity in higher education and is contributing a chapter to a collection of essays on historically black colleges, entitled “Historically Black Colleges and Universities Struggle for Equity Post Fordice.” The collection will be printed this fall by Clarity Press.

She has also received several awards including the Susquehanna Community Builder Award and the Birmingham Partnership for Change Community Service Award.

“She was someone who seemed to be a good fit,” said Bensel.

Hinton explained that her primary responsibilities will include assisting intercultural students and helping to get the Gateway program in Pelletier Library underway. The idea of the Gateway, she explained, is to integrate all the services that students need academically and advising into one central location.

“It is kind of like one stop shopping,” said Hinton.

Hinton did admit that the job was her primary reason for coming to Allegheny. However, she also expressed her satisfaction with the college thus far, as well as her hopes for the future, praising the college for its effort to strive for better.

“There are ways to do better what we have done well,” said Hinton. 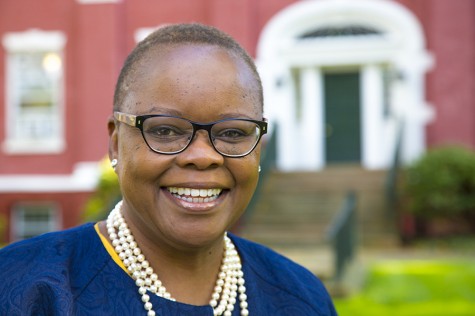