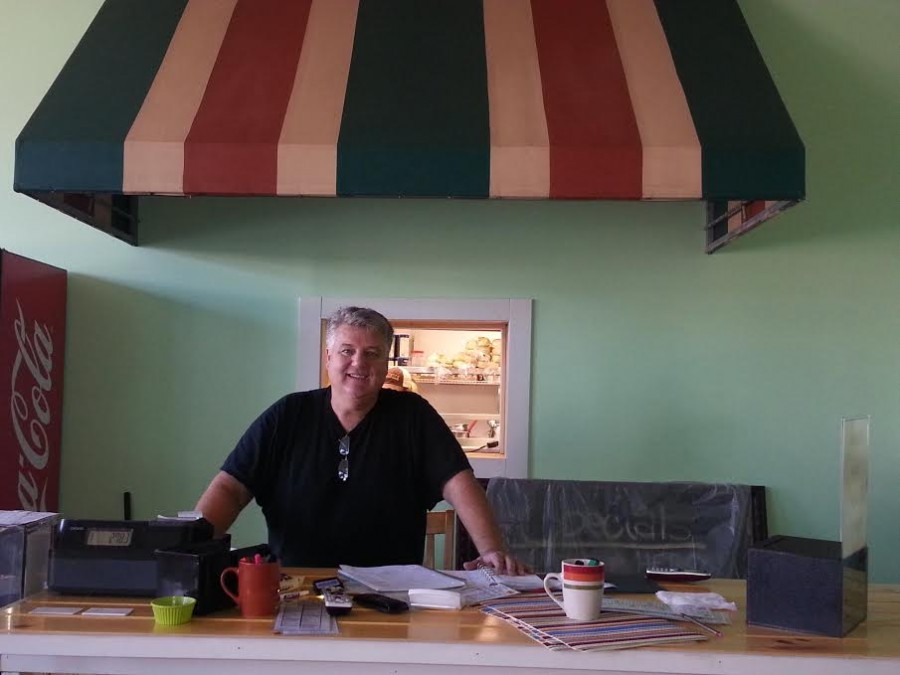 Owner of Pennsylvania Sandwich Company, Mark Brode first opened his shop in 2013. On week days the shop is open from 10 a.m. to 8 p.m. and they offer over twenty five specialty subs on their menu. Stop in for a sub and a coffee or take it to go with their pick-up service.

Pennsylvania Sandwich Company, located at 342 North St. Meadville, PA, has finally opened its store front doors to the Meadville community.
Ever since its opening in April of 2013, Mark Brode, the owner, has been conducting business from the kitchen entrance due to construction on the intersection of North Main Street and North Street.
Despite the delay, Brode is warming up to his new store front and planning to make it Allegheny Gator themed, complete with a special Allegheny Gator treat.
“I’m going to have, like an ‘Allegheny Corner’ over here, in that big booth,” said Brode. “I have a baseball T-shirt that the baseball team gave me last season, so I’m going to put that up; I’m going to try to pick up some memorabilia from Allegheny and put them up. I’m really looking for some stuffed alligator heads, I want to get a couple of them.”
Brode’s original setup was that of a New York Style Deli, where one would order a sandwich, pay, then leave. Through constant customer suggestions, Brode pacified their requests and constructed exactly what they were asking for: a seating area.
“A lot of people were saying, ‘you know, if we had a place to sit down it would be better. We’d come more often’ that sort of thing. So I sort of caved in and made a seating area.”
The inspiration for the Gator themed seating area, however, derived from the sports teams that periodically come to the shop. Brode’s past interactions with team coaches and members pushed him toward both honoring the gator community, and attracting more students to fill his establishment.
“I like to talk to the students when they come in, because I have two kids that are you guys’ age for the most part,” said Brode. “I’ll ask, ‘What are you doing? What are you taking?’ The kids [Allegheny students] here are awesome. They’re just really good kids; really friendly and bright.”
Eleni Kaffenes, ‘17, a regular, thinks the new store front is a great idea. One of the most attractive aspects of Pennsylvania Sandwich Company to Kaffenes is the fact that it’s a family owned business.
“You could tell that all of the family worked there,” said Kaffenes.
Brode commented on keeping the business family owned versus establishing a chain that would progressively accumulate more money.
“Everybody wants to open up another store when they start one, but you have to have the right success, the right remedy…it’s not an easy thing to do,” said Brode.
Brode goes on to say that chains tend to create a diminished the sense of pride within employees because they are less invested in its success.
Brode, who commits about eighty to ninety hours a week into PSC, emphasized that the charm of his business is more than just good food and a fancy store front. According to him it’s his initiative to make sure the customers feel welcome and at home.
“When you’re invested in something you’re going to try your best, do your best, make sure that the product is right, make sure the customers are treated correctly, and everything goes smoothly,” said Brode. “This is way more than just another day at work for me.”
One recurring inquiry amongst the interviewed Allegheny students, like Allison Ganger, ‘18, who have never been to Pennsylvania Sandwich Company is whether or not Munch Money or Gator Cash is accepted.
Ganger mentions that she would like to go one day in light of the recent renovations, but that she’d be more likely to go if they accepted Gator Cash or Munch Money, which they currently do not.
“I’m trying,” said Brode, on the getting Gator Cash established in his store. “I have an intern now and she’s working on it.”
Depending on how quickly the process can be done, PSC could be one of the many Meadville establishments to accept Gator Cash and Munch Money by the end of the week.
PSC is picking up interest amongst Allegheny students who reportedly mentioned that they are now likely go after hearing about the new Gator space.
“I’ve never been,” said Sarah Cole, ‘18. “But I’ll probably go now. I’m a sandwich person.”
“Now I’m curious,” said Joshua Perez, ‘18. “That honestly sounds really cool. I would definitely go now.”
The storefront is completely functional, and beside some small installations still to come, PSC is open for business.
Some things still on Brode’s to-do-list include Wi-Fi and streamed gator games so that students can experience the excitement of school competitions in the spirited section of the Pennsylvania Sandwich Company.