Students get hands on with Combat Paper Project 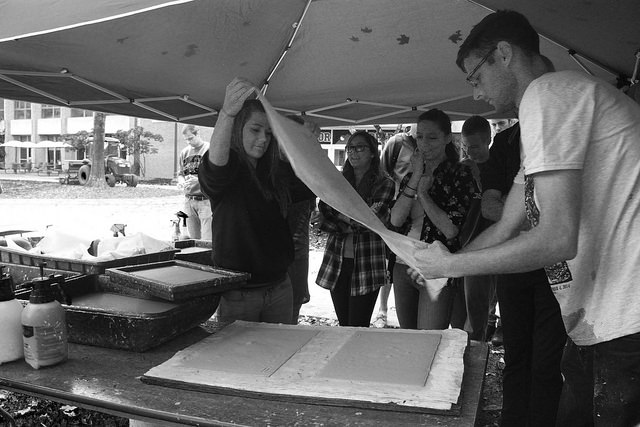 Rain did not stop Allegheny students from gathering in the gator quad this week to give veterans uniforms a second chance. The workshop on paper making was a part of the Combat Paper Project conference that Allegheny College hosted this past week.
Professors Steven Prince and Alexis Hart started planning the conference together in the summer of 2013. The interdisciplinary conference had various informative panels, documentary screenings, dance performances and guest lecturers.
“Combat exists inside us in a deep set. People may be struggling with suicide or addiction or abuse,” said Prince. ”I think trauma can be dealt with through a communal response and that’s what this project is. It’s about community coming together to express and explore those deep-set hurts in open form. You can’t just bury trauma, it’s going to manifest itself in some way.”
Nathan Lewis, an Iraq war veteran, facilitated the Combat Paper: “Word Made Flesh” project on campus. Lewis has been active with this project since 2007, while he was involved with Iraq Veterans Against the War organization. He has participated in dozens of workshops similar to the one Allegheny held for the conference.
The Word Made Flesh project uses old uniforms donated by veterans from as far back as World War II. The uniform is transformed into special paper where people can engage artistically with the uniform. “It acts as a mode of expression and release for veterans or anyone dealing with trauma,” said Lewis.
Monday through Thursday from 10 a.m. to 4 p.m., Lewis demonstrated the process of papermaking. To begin, students were separated into small groups.
One group focused on cutting the veteran uniforms into small squares while the others focused on the final steps. The squares were then beaten into a pulp in a hollander beater. After completing those steps, the remaining pulp is put into a vat and this is where the sheet of paper comes together. Finally, the sheets are pressed and dried.
“Uniforms are a perfect representation of time in the military. Individuals are reflected in their uniforms,” said Lewis. “It is uniform and standard across the board and that’s how the military and life is. We all have these unique things that make us individuals. No two military experiences are exactly alike. It’s the perfect symbol of your service. It shares things that are in common with others yet it’s unique.”
Students quickly noticed that each of the sheets had a small paper clip on the corner. Lewis said that the paper clip watermark was adapted from a close friend. He explained it was an underground anti-war symbol in the military and he was bringing it back.
Prince and other professors cancelled their normal lectures and required their students to attend the exhibit. He connected this project to the Allegheny community and argued that combat is not just served in war.
“The Combat Paper Project helps release the burden from yourself. We use this project to heal ourselves and communicate our opinions, experiences and stories,” said Lewis.
Bryce Olson, ’18, a student of Prince spent time at the Word Made Flesh project early on Monday.
“I was honored to participate in the project because there are men and women who risked their lives to help us and now I have had a unique opportunity to use the same uniforms they fought in to make art,” Olson said.
Prince reflected how art can be symbolic to the community and used to illustrate human experience and should not be taken lightly.
“Think about the fabric you have. It was made here in America. That fabric covered a body that did work and service. How do you think that fabric came back?” Prince said. “It’s not the same. Nothing is ever the same. That’s the power in the project I believe.”