Combat Paper Conference and Art Exhibit to come to campus 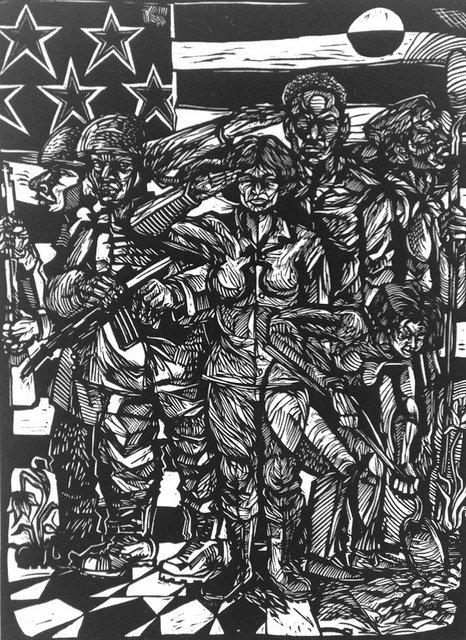 Steve Prince, Artist in Residence and event curator, designed this piece for the conference. The artwork was done on the paper made from veterans’ uniforms.

The uniform is a symbol of service, respect and national pride for many but it can also be a canvas for expression. On Sept. 29 through Oct. 4, Allegheny College will be hosting a conference and art exhibit, “Word Made Flesh” which will feature the work of veterans from the Combat Paper Project.

Through the Combat Paper Project, soldiers take the uniforms they wore in service and turn it into a medium for art and expression. In paper-making workshops the veterans cut up their uniforms and work through several steps, ultimately turning their uniforms into sheets of paper.

From there, the veterans are able to transform an object that used to represent conformity and sacrifice and transform it into a platform for artistic expression.

Artist in Residence Professor Steve Prince and Associate Professor and Director of Writing Alexis Hart are the organizers of the conference and began their discussion of the Combat Paper Project back in 2013. Prince is also the curator, along with Assistant Professor of Art and Gallery Director Darren Miller, and has his own work featured in the exhibition.

They collaborated and invited 26 artists from across the nation to be involved in the exhibition. Each of the artists were given some of the combat paper, pre-made from the retired uniforms, to respond with their own work.

Hart has previous experience with the Combat Paper Project from her tour of college and university campuses back in 2010. She was doing grant research with her co-researcher Robert Thompson and they were working with students who were receiving tuition for their military service as a part of the post-9/11 G.I. Bill.

“A couple of the campuses we visited were hosting the Combat Paper Project. I got to see it in action and that was one of my first introductions to the project,” said Hart.

Hart hopes that the conference will integrate experiences and artistic expression along with an academic study of war and trauma. It was also important for both Hart and Prince to connect the Allegheny community of faculty and students to the local Meadville community through the conference. In addition to having nationally recognized speakers and professors, the conference will be bringing in members of the greater Crawford Community like Bruce Harlan, executive director of Meadville Women’s Services.

Hart, who served in the U.S. Navy for six years of active duty, recognizes that there is space for the military experience to be combined with academic world. She also believes the conference will be relevant to students because the war has been such a presence in their lives.

“Many of the students here probably can’t remember a time when our country wasn’t at war and yet it’s also been very distant for them,” said Hart.

Ashley Keenen, ’15, is looking forward to the conference because of the partnership with the Combat Paper Project.

“I’m glad that there is an organization out there that has dedicated itself to helping veterans make sense of the trauma they experienced. I’m excited to see their work,” said Keenen.

The ultimate goal of the conference, according to Prince and Hart, is to think about the ways in which art helps people to articulate and process traumas that are present in every life, to one degree or another. This connects to the earlier exhibition, the 8 Hour Project where the theme was loss.

“I think that art becomes a wonderful way in which we can get people to grapple with and deal with those internal issues and hurts and pains and give them a place where they can actually express those things” said Prince. “That which is hidden within can actually reveal itself through the artistic process. That is at the heart of the combat paper.”

Hart reflected on her own experiences in the navy and noted that military service is just one form of civic engagement.

“I think service can come in many different forms, but I’m very proud that I spent time in a uniform,” she said.