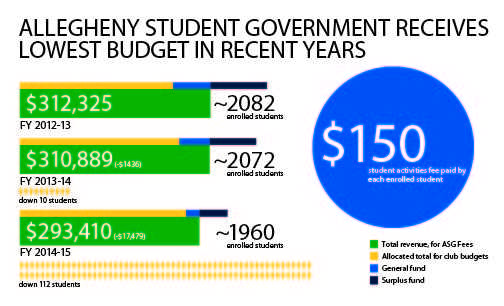 With enrollment in this year’s freshmen class down by 112 students, Allegheny Student Government’s budget saw a sharp decrease in approximately $20,000. Because the revenue for ASG fees is dependent on enrollment, ASG is being forced to be more conscientious of how much money is being spent and for what reasons.

“Over the past couple years we’ve been seeing a steady decrease in our budget due to the decreasing enrollment and last year we were hit pretty hard financially,” said Leslie-Paul Jamerson,’15, the ASG financial controller. “Just because a lot of clubs and different organizations needing some necessities. It was just terrible timing.”

Combining this budget deficit with last year’s major expenditures, ASG Treasurer Miguel Liriano,’16, and Jamerson are being more careful in how they allocate the budget.

“I think we are thinking more critically on what is needed and what is not needed and asking intentional questions to get us to a point where we are not wasting any resources,” said Larry Hailsham,’15, ASG president. “There’s a difference between a need and a want, and there’s a difference between something that’s important and not important. We’re not going to make those decisions. We’re going to work with each organization to get them to understand what is needed and what is not needed so the entire campus can benefit from the monies that are left over.”

In two years, the student government’s general fund has decreased by $40,000. The general fund is based on the budget ASG is given and what they have budgeted for clubs for the upcoming year. Liriano credits this to the necessary large expenditures.

“In general we’ve had a lot of expenditures in recent years, we’ve increased in clubs as well, so we’re giving more money. Clubs are asking more from the surplus fund to better their club and the student body as a whole,” Liriano said.

While historically ASG has remained consistent in the amount it is allocating towards clubs, the increase in clubs is not a primary reason for the increase in spending.
“The increase in clubs has made some of an impact, but it’s not one of the major reasons as to why,” Jamerson said. “The major reason has to be the expenditures and the under enrollment. When new clubs come in, the amount allocated is based on the fact that they are a new club. So it’s not like a new club is going to get a huge percentage of our budget. It’s very relative to the situation.”

The expenditure with the largest price tag goes to the Crawford Area Transportation Authority Loop, the bus route provided for students. One hundred percent funded by ASG, the Loop is budgeted for $24,000. That, combined with the Major Events Concert last year, has caused for a sharp decrease in the general fund. Last year, ASG’s management of the expenditures led to dipping into surplus funds by $2,000.

“When we say that we go negative, it’s not necessarily like you have a bank card and you go negative,” Jamerson said. “We weren’t spending money that we didn’t have, it was just that we had a specific allotted amount for general funds but due to the necessities that we couldn’t foresee, we had to dip into the surplus more and more.”

Hailsham credited this poor management to a lack of understanding of the role of the financial treasurer.

“The previous treasurer and financial controller didn’t manage our budget right and didn’t keep track of what people were spending,” Hailsham said. “So we overspent by $2,000. That’s the main reason. The hope is that this year, with [Liriano] and [Jamerson] on finance…this won’t happen and we’ll also develop a more sound understanding of what finance is and how ASG can actually utilize our money to benefit the entire community.”

Looking ahead, ASG is still asking for student organizations and clubs to come in and request money but asking clubs to be more aware of how they get their funds.

“The current financial situation is definitely something we need to be proactive in dealing with, but it’s not something necessarily to be alarmed with,” Jamerson said. “I don’t think students should think that all the plans that they have for their clubs or other plans they had for themselves or smaller groups has to be drastically affected. It’s just that we’re asking them to be a little more cognizant of the money that they spend or a little bit more cognizant of how they actually want to accomplish this certain goal.”