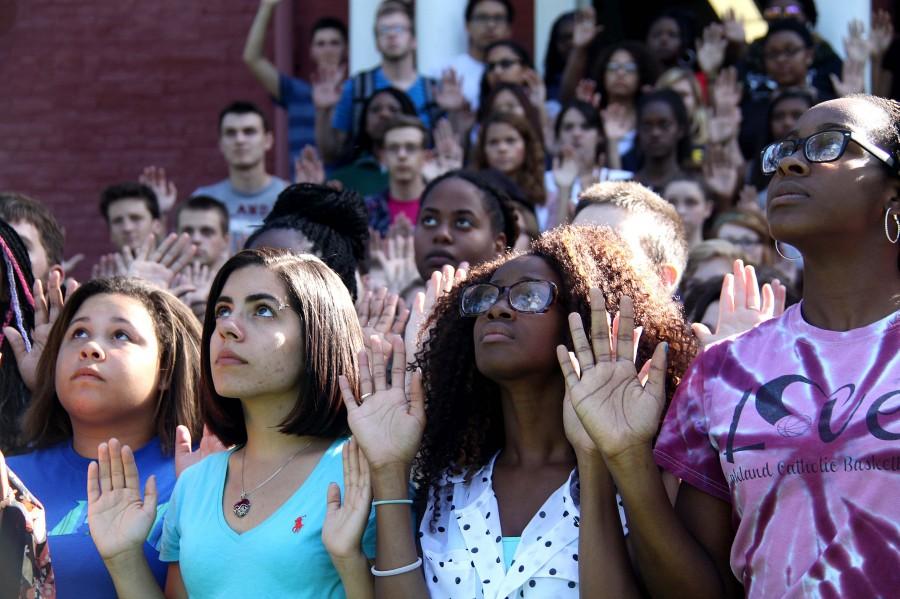 MEGHAN HAYMAN/THE CAMPUS Amanda Warner, ’16, from left, Melanie Perez, ’15, Maya Jones, ’15, and Ifeyinwa Uwazie, ’16, were four of the more than 90 students holding their hands up for the “Hands Up, Don’t Shoot” photo event in front of Bentley Hall on Friday, Aug. 29.

Students gathered in front Bentley on Friday Aug. 29 to stand together in protest of the recent events in St. Louis, Mo. They stood in silence with their hands up in the air. What was once merely a sign of surrender and compliance is now an active demand for peace and racial equality. Allegheny’s Association for the Advancement of Black Culture (ABC) organized the event and over 70 students participated in the photo.

“Hands Up, Don’t Shoot,” has become an unofficial symbol for Ferguson and the protests against police brutality after 18 year-old Michael Brown was shot by police officers. The death of Brown on its own had outraged people on a national level before witnesses reported that Brown had his hands up in compliance when he was shot and killed.

Protests ensued in Missouri where citizens sported t-shirts and signs with “Hands Up, Don’t Shoot” and “Justice for Michael Brown” and before long it gained national attention. Social media sites like Facebook and Twitter have allowed the campaign to spread from protests on the front lines of Missouri to people nationwide, including students at Allegheny College.

Vice President of ABC, Nia Burnett ‘15, saw photos from other universities like Harvard and Howard, and even civil rights leaders and celebrities, standing with their hands up in support of Michael Brown. It was then that she had the idea to bring the movement to campus. The purpose of these photos are to bring attention to issues of civil rights and social injustice, not just in Ferguson but worldwide.

Burnett contacted Imani Prince, ‘16, president of ABC and they created a Facebook page and invited everyone they knew to the event. On the Friday of the photo people filed in, some coming in groups and others walking over alone.

People were arriving down to the minute before the photo was taken. Others who were walking past and saw what was going on cheered from the sidelines or ran in to join the photo. Nearly 90 students participated in the photo.

“I started tearing up,” Prince said about the support of her fellow classmates. “You never know who is going to show up.”

During her speech to the participants Prince stopped when she began to cry.

Burnett then took over. Both women said they believed that justice will not be served until those who are not affected by events, such as the death of Michael Brown, intervene and stand with those people who are affected.

Although the event in Ferguson, Mo., took place weeks ago, the discussion around police brutality and matters of race continues.

On Aug. 21 another young black man, Kajieme Powell, 25, was shot and killed by the police for stealing soda and donuts from a local convenience store. The shooting took place less than five miles away from where Michael Brown was fatally shot. The police released a cell phone video which shows the shooting. The video and the statement from the police do not line up.

Sam Dotson, the St. Louis police chief, said in his statement that the two officers fired only after the suspect came within three or four feet of them with a knife raised in “an overhand grip.” The video, however, shows Powell standing further away and with the knife at his side when the officers opened fire. Nine shots can be heard in the video and Powell falls to the ground before the shooting stops.

According to reports of the incident, within an hour of the shooting local community members gathered around the crime scene and began chanting, “hands up, don’t shoot.”

Autumn Parker, ‘16, who participated, saw the event as being reflective of the Allegheny community as a whole.

“It was a beautiful and heartwarming turnout. Allegheny prides itself in the idea of being a supportive community and aware environment,” Parker said. “And the ‘Hands Up Don’t Shoot’ photo shows that. Yet we have to remember to keep the conversation going thus turning it into action.”