Six students selected to work in Mysore, India for the summer 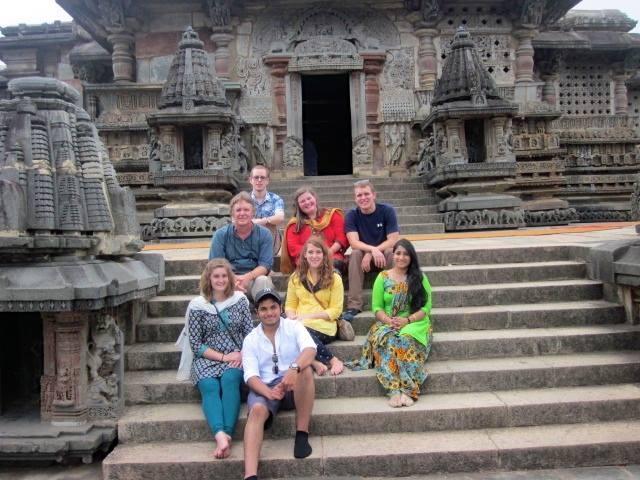 Six Allegheny students interned abroad this summer at the Swami Vivekenanda Youth Movement (SVYM) in Mysore, India. The founder of SVYM, Dr. R Balasubramaniam (nicknamed Balu),  brought this opportunity to Allegheny’s radar in September 2013 when the college hosted his stay.

Balu met with Terry Bensel, associate provost and director of the Gateway, and Jenny Kawata, director of international education, to discuss the internship opportunities through SVYM. During his stay, Balu also gave a lecture in the Tippie Alumni Center which Bensel described as well-attended, inspiring and especially well received by students.

Balu started SVYM with a group of medical students in 1984. The SVYM website describes the startup as these students wanting to do more with their medical education.

“A group of young medical students led by R.Balasubramaniam at the Mysore Medical College, in Karnataka State, India, were starting to feel that the career in medicine they dreamt of pursuing was very different from the practice of medicine around them. They believed that they had it in them to make a difference and make a positive impact on the lives of the poor and the marginalized.”

Since then, SVYM has provided medical care and expanded its program with the help of funding. Now the program brings students from across the world to India and gives them a variety of internship opportunities, with the areas of study including health, education, socio-economic empowerment and TRAC (training, research, advocacy and consultancy).

A team of Allegheny staff and faculty reviewed applications to consider the students most suitable for the program.

Prior to starting their internship, the students, accompanied by Juvia Heuchert, psychology professor, travelled to Karnataka to begin a two week period of cultural immersion. This included taking language and cooking courses, learning about Indian history and language and experiencing everyday Indian life. Following that process, Heuchert, who helped lead the experiential learning seminar to India earlier in the summer, travelled back to the United States and the six students began their internships.

Devenney and Bryson interned at Grassroots Research and Advocacy Movement (GRAAM) through SVYM. They focused their work on health and wrote a quality assurance proposal for Karnataka State.

“Everyday, we practiced yoga, ate breakfast, worked in a cubicle setting on research assignments, ate lunch then worked until 6 p.m.,” said Bryson. “In the afternoon we often did something in town such as a Bollywood film and walking around the local markets.”

Bryson describes her experience as incredible.

“I have a whole new appreciation for the Indian culture,” said Bryson. “We received great feedback from mentors and learned a great deal from them in terms of research methodology. In addition, we had an opportunity to live among Indian students and immerse ourselves in the city of Mysore.”

While the students spent a great deal of time working through SVYM and immersing themselves in their learning, they also took advantage of their time abroad and experienced authentic Indian life.

“On one of our very first days in India, we took a day long walking tour through the city of Mysore, and we saw the market, the palace, rode an elephant, saw a Catholic church, visited the temple,” said Steinmetz. “We also took different trips to Hindu, Buddhist, and Jain temples. We spent a lot of time exploring the local market that has more than six hundred stalls full of spices, fruits, vegetables, flowers, perfumes, bangles and everything else you can imagine.  We visited elephant camps and took a safari where we saw a leopard, a chameleon and a sloth bear.  We went to an Indian water park. We went to a waterfall.  We spent a weekend in Bangalore and visited friends that we’d made on one of our day trips.”

The students made an effort to try new things and take advantage of their time abroad.

“I’m glad the touristy feeling went away after several weeks. I started to recognize places and also pick up on the language (Kanada),” said Devenney.

During their stay, the students lived in dorms (hostels) with other interns in the program.

“I was lucky enough to room with someone from India,” said Devenney. “His name is Sarath, and he is an 18-year-old college student who was helping the Princeton program with local viewpoint and logistics. It was an incredible experience living with him and I learned more from living with him than anything else I did my entire time in India.”

On one of the weekends, the six students accompanied Sarath home to his village.

“We took a five hour bus ride to my roommate’s village in Kerala, nicknamed God’s Own Country,” said Devenney. “We were actually the first white people to ever go to his village, so talk about a humbling experience. We stayed at his home and the hospitality we were shown was absolutely incredible.”

Steinmetz agrees with Devenney on the one of a kind experience Kerala presented.

“The best thing that we did though, was going to Kerala, a neighboring state, with Garrett Devenney’s roommate from Vivekananda Institute for Indian Studies (VIIS) and visiting his family in their home in the jungle,” said Steinmetz. “We spent a weekend with them and their love and hospitality were unmatched, and they even took us to a beach!”

The students talked highly about their experience and some even said they would not hesitate to return. With every fond memory there is always an anecdote to follow and this trip was no exception. Bensel laughed about the process that ensued to receive the students’ visas prior to the trip.

“We found out on Thursday, five days before they had to leave, that their visas were denied because we had filled out the wrong form,” said Bensel. “It was really a bureaucratic nightmare. Jenny Kowata drove through the night personally to New York City to get there on Friday, went to the agency that processes the passports to plead with them to reconsider. They turned her down. She took a taxi to the Indian Consulate, pleaded with them and an hour later they changed their mind and granted the visas. She came back Saturday with the passports.” 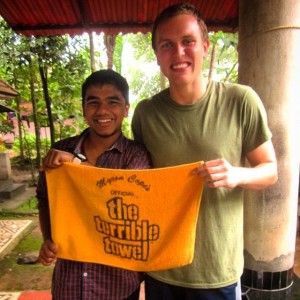 PHOTOS COURTESY OF GARRETT DEVENNEYGarrett Devenney, ’16, and his roommate Sarath, an 18-year-old Indian college student, did a cultural exchange during which Devenney gave Sarath one of Pittsburgh’s famous Terrible Towels. 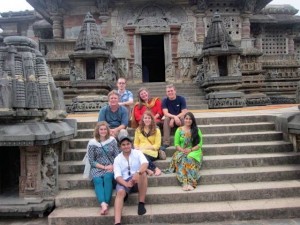