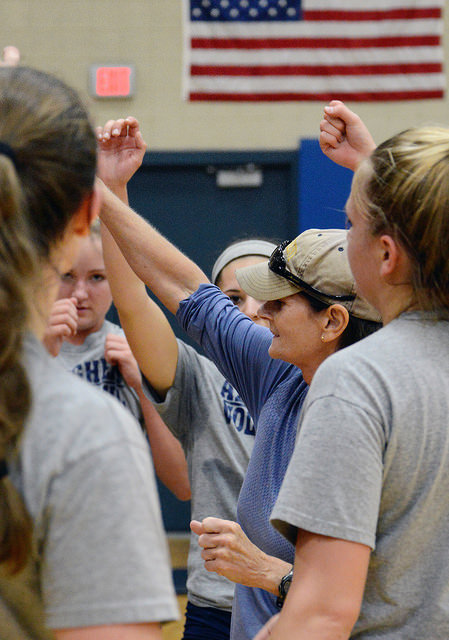 Sheehan has been coaching volleyball at Allegheny since 1986 and has since become Allegheny’s all-time winningest coach, in addition to being the 1987 NCAA East Region Coach of the Year and 1987 and 1990 North Coast Athletic Conference (NCAC) Coach of the Year. In the first game of the 2014 season, the team was part of a moment of Sheehan’s career by winning the 600th win.

“During the game, that 600 was not in my head. I was just coaching the game in front of me,” Sheehan said.

The team knew going into the game that it would be Sheehan’s 600th win.

“We wanted to go out and do everything possible to help her achieve it,” Bailey Gawley, ’17, said, “We played our game to the best of our abilities, but I definitely think that us knowing about the 600 wins was motivation for us to try extra hard.”

Catherine Kasianowcz, ’15, said knowing it would be coach’s 600th win made the team play agressively and made each point more significant.

According to the Allegheny Sports website, Sheehan is the 23rd coach in NCAA Division III history and the only active coach in the NCAC to surpass the 600-win plateau.

Sheehan started her coaching career as a high school coach, then came to Allegheny as a part time coach.

Sheehan has also been on the American Volleyball Coaches Association Division III National Ranking Committee, the NCAA Division III All-America Committee, and the NCAA Regional Selection Committee during her time as a collegiate coach.

According to the Allegheny Sports website, Sheehan is Allegheny’s all time winningest coach and ranks twelfth in wins among active NCAA Division III coaches.

The game of volleyball has changed in Sheehan’s time as a coach.

“The scoring and the rules have changed and players have adapted to that and I have stayed on top of that as a coach,” Sheehan said.

Watching players develop and mature both physically and mentally in the game and in life is what Sheehan focuses on and enjoys about her coaching.

“Coaching is a unique occupation where I motivate and encourage others beyond their perceived limits,” Sheehan said.

Gawley said Sheehan pushes the team to be better not only on the court but off of it as well.

“She has taught us so much about commitment, accountability and the importance of service in volleyball and in our lives,” Gawley said.

“The disciplined nature coach has instilled in me has helped me both on and off the court and has helped shape me into a more well rounded and mentally tough person,” Kasianowcz said. “She knows that life begins outside of your comfort zone and has pushed her players to become the best they can be.”

Sheehan said each year brings memorable moments, and many came from winning championships.

“I savor those moments, not every coach gets that. The teams that won those, the winning, and the process to get to that point are memorable,” Sheehan said.

Gawley said her favorite part of being on the team is that there is always someone to turn to whether that is a coach or a teammate to talk about volleyball or about life.

“Everyday I get to go to practice or to a game and do what I love to do which is play volleyball,” Gawley said. “The best part is that I get to do that with people that share that love of the game. It created such strong bonds and therefore such a support group amongst its members.”

Whether the team is playing a game, on road trips, or at the library studying for finals, they are always there for one another, Kasianowcz said.

The team is looking forward to a season of playing an aggressive game and always pushing their opponents.

“We are a rather young team, with over half being first year student athletes,” Gawley said. “So, what I am most looking forward to this season is all of us growing together and becoming not just a good team but a great team. We definitely have the potential, and I think that through our hard work we can capitalize on it.”

“I hope to develop at every opportunity, it is exciting to watch,” Sheehan said.