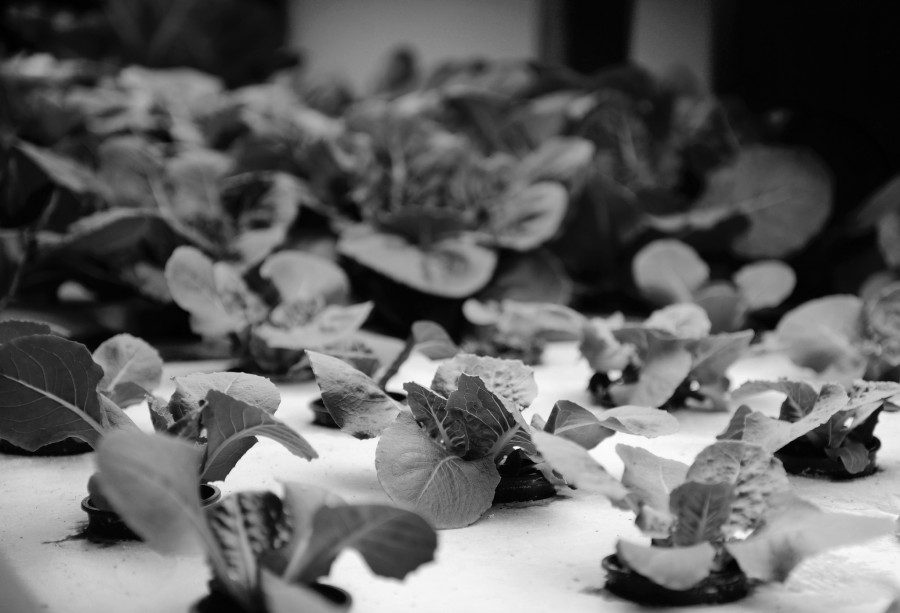 PHOTOS BY AMASA SMITH/THE CAMPUS While lettuce is traditionally grown in soil, in Carr Hall the lettuce is grown in water. This practice is part of the aquaponics system, which allows the fish swimming below to fertilize the lettuce.

With the start of the new semester, the environmental science (ES) department has brought in three new professors to the department, leading to a more varied selection of environmental perspectives.

In the past year, the ES department has seen changes in four positions for this academic year. Jim Palmer, associate professor of environmental science and biology, retired in December 2013. Mark Neff and Kate Darby, married assistant professors of environmental science, have relocated and are currently teaching at Western Washington University in Bellingham, Wash.

Haywood, having just finished his Ph.D. in May 2014 at the University of South Carolina, brings an ethnoorthinology focus to the department. His interests lie in the relationships between humans and birds, specifically how humans affect birds and vice versa.

“It’s basically looking at the ways in which [birds] are involved in our culture, anything from the bald eagle to the turkey at the Thanksgiving dinner. We can think about how they’re connected to us as a culture, how they symbolize our national identity, our community identities,” Haywood said.

Trained as a geographer, Haywood brings his own angle to the ES department, as does Carbone.

Carbone, previously a physics professor at Manhattanville College in Purchase, N.Y., brings a more math-based perspective to the department and is currently teaching a course on quantitative sustainability.

“It’s getting students to think about numbers, trying to look at environmental science in a quantitative sense,” he said.

Meanwhile, Carbone believes that his physics background only adds to what he has to offer the ES program.

“I think it is good to have someone with a really strong quantitative background to help round out the types of ideas that you’re teaching here,” Carbone said. “Technology is going to be a really important factor of how the human race adjusts to changing climate and other environmental problems so I think it will be really helpful to have my sort of technological perspective mixed in with the other types of expertise that people have.”

While different professors bring in different perspectives on environmental topics, the department is still conscious of the need for a strong foundation with consistency among the introductory courses.

One of the major aspects of this is upholding the core curriculum despite the changes in available upper-level courses due to changing professor specialties. Rich Bowden, professor of environmental science, hopes that the basic introductory curriculum of the department gives students a firm foundation, regardless of the more specific upper-level classes offered.

“For us, there’s constancy even in change. The point is that we still have a common core,” Bowden said, discussing the required classes for all ES majors. “The foundation for ES hasn’t changed. Certain specialties may leave if an individual leaves, but they’ll be replaced with different opportunities.”

Haywood and Carbone both currently teach ENVSC 110, the introductory course for ES majors, but they are co-teaching with professors who have been part of the department in the past.

“It’s really nice to be paired with a veteran professor who has been here for a while and knows how things work and has been able to help me figure out very quickly the rhythm of the class,” said Haywood, who co-teaches with Thomas Eatmon, assistant professor of environmental science.

“It’s kind of good to have that diversity in the classroom. They have different knowledge, different experiences,” Muñoz said.

Muñoz also believes that despite any changes in faculty, the strength of the Allegheny ES department will still provide her with the necessary foundation to pursue a variety of specialties involving environmental studies.

Despite the changes, Haywood hopes that the new energy of the department will allow for further growth of what he considers an already strong ES program.

“It’s an exciting time to be coming in as a new person because there’s all this momentum and all these cool things going on. It’s just exciting to see where the department’s going to go next,” Haywood said.

With Haywood’s focus in geography, Carbone’s in physics and quantitative studies, and Davis’s in political and social ecology and ecotourism, the new courses added to the department will still provide a variety of topics for students to experience.